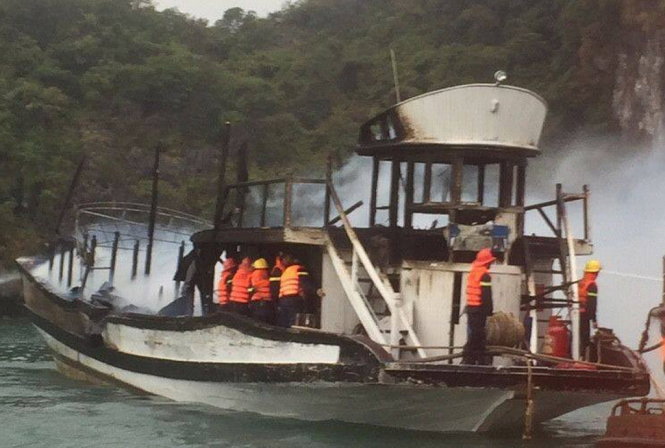 A tourist boat carrying 21 people suddenly burst into flames near the Titop Island in Ha Long Bay, located in the northern province of Quang Ninh, but all passengers were safely rescued and returned to shore on Tuesday.

Fourteen foreign tourists were among the passengers onboard the Anh Duong QN-3598, operated by Anh Duong Co. Ltd., according to information provided by the provincial administration.

The boat had spent the night on an islet in the UNESCO-recognized bay, and was on its way back to the Tuan Chau port when the fire broke out.

Rescuers rushed to the scene in time to take the foreign tourists, one tour guide and six crew members to shore safely, according to the administration.

The province’s deputy chairman Vu Van Dien was at the scene to oversee the rescue effort, and will launch an immediate inspection on the fire safety of all boats operating in Ha Long Bay later on Tuesday.

Passengers from the destroyed boat are claiming compensation from local authorities.

This is not the first time a tourist boat has caught fire in Ha Long Bay.

In May 2016, the QN – 6299 ship, operated by local travel firm VIT Co. Ltd., burst into flames after returning from a sightseeing trip, forcing 36 foreign passengers and one local tour guide to jump into the water to save their own lives. They were eventually safely taken ashore.