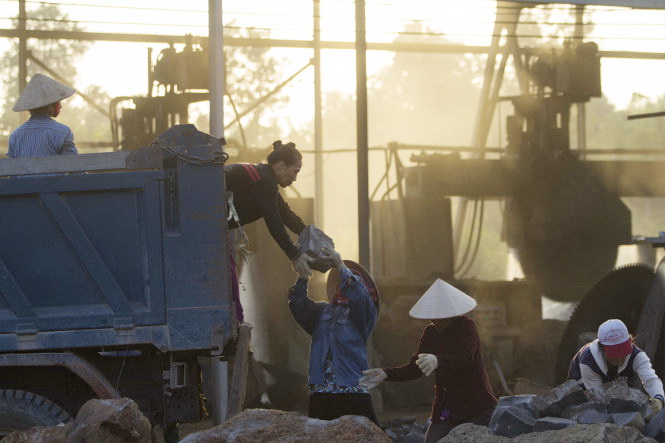 Rain or shine, a group of female stone loaders in a southern Vietnamese province rush to quarries upon receiving phone calls. The group, which has seven members, has performed the physically taxing job of loading rocks onto trucks at quarries throughout Vinh Cuu District in Dong Nai Province, around 30 kilometers from Ho Chi Minh City, for a living.

The women, from nearly 40 to more than 60 years of age, have work experience of between five and up to 20 years.

There are hectic days which start as early as five in the morning.

Trucks keep rumbling past, leaving the women no time even for breakfast.   At midday, most have a plain lunch with instant noodles and take a quick nap before working until seven or eight at night.

They are usually deprived of good sleep due to nagging pains in the back, shoulders, knees and joints.

The adverse health effects are not only insidious but also immediate, as the women are vulnerable to work accidents as rocks can fall onto their body parts any time if they are not careful enough. What they suffer range from scratches, red, watery eyes, to more serious injuries which take days off work and exorbitant medical costs for treatment.

Their daily wages oscillate from a few dollars to VND500,000 (US$22), depending on the number of trucks and their capacity.

Each of the women has their own life story.

Some are breadwinners in their families, while others continue to do the job to support themselves and not to be a financial burden to their children.

Some have grown into owners and hire rock processing sites.

As Tet (Lunar New Year) is nearing, the women have their hands full with different jobs to earn money for the holiday and do not let their male counterparts outperform them.

Below are a series of photos by Hao Dinh featuring how the women deal with their tough job.

Sweat keeps rolling down the face of Do Thi Soi, 57, who has done the taxing job for 26 years now.

Nguyen Thi Dung makes quick repairs to her bicycle before a truck comes for the rocks at 5:00 am. Four group members move around between quarries by bike. Some quarries are a few kilometers apart and the women ride on steep slopes.

Job hazards are inevitable as their safety gear includes merely gloves and flip flops. The photo shows Quynh getting back to work only after a few days off, after she had her toe nail crushed by a falling rock.

The rocks are bulky and weigh up to dozens of kilograms, which are taxing even for young people. Truck drivers sometimes lend a helping hand to the women in tough situations.