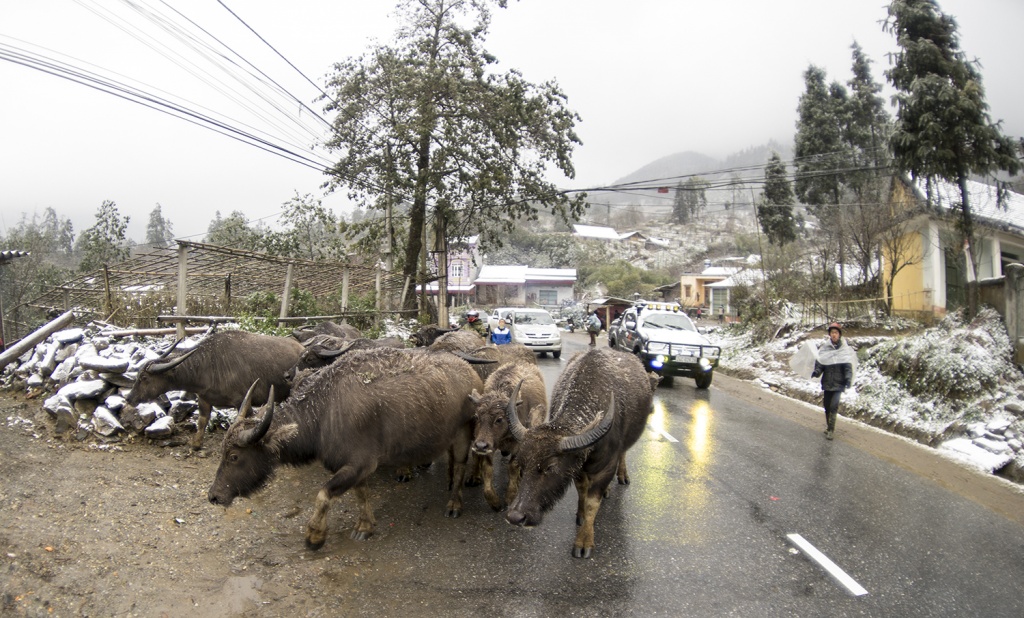 When tourists smile and farmers cry in Vietnam

“Snow in Sa Pa” is something tourists always look forward to. They keep one another informed of the snow on a minute basis, and even when it is snowing at 2:00 am, the holidaymakers still excitedly rush to see it.

Different groups of tourists jostle to visit Sa Pa, mostly in order to see the Europe-like snowing there.

However, for farmers in Sa Pa, ice and snow are just words of horror.

Farmers are frightened of the moment when it starts snowing, as it is when their heavily invested pots of ornamental flowers start withering, and their vegetable crops share the fate.

People of the Mong and Dao ethnic groups have to suffer even more, as they have to take extensive care of their buffaloes.

While men have to go to Lao Cai City to buy grass to feed their buffaloes, women and children have to take the cattle to lower places to avoid the freezing cold of the mountainous area.

Those who come to see the snow cannot be to blame; to some extent, these tourists even contribute to boosting tourism development in Sa Pa.

It is the farmers who suffer. They are always the most miserable.

Below are a series of photos by Ngoc Bang featuring the farmers and their life during the time.

A boy of the Mong ethnic group clears snow off his vegetable crop.

A farmer looks dejected as his cardamom crop is destroyed by snow.

A farmer transports fresh feed for his cattle.

A tourist poses for a photo with snow.

A vegetable crop covered with snow in Ta Phin Commune

Farmers in Lao Chai Commune chop down peach trees for sale to make a living during the harsh weather.

Traffic is seen in chaos as tourists flock to Sa Pa to see the snow.

A farmer is seen carrying his cattle for sale when it was -2 degrees Celsius, plus thick snow.

Tourists smile when taking a selfie, while this means sorrow for local farmers.