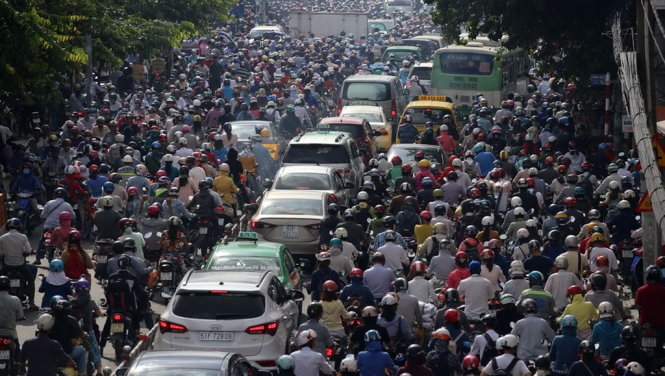 The Ho Chi Minh City Department of Transport is set to enact numerous traffic management measures, with the final goal of cutting the number of congestion spots citywide by half within this year.

Traffic jams have occurred frequently across Ho Chi Minh City, during the morning and afternoon rush hours and at major streets and entrances to airport, seaport or bus station, a panel formed to oversee the city’s traffic safety said at a meeting on Friday.

Nguyen Ngoc Tuong, deputy head of the panel, pointed out that there are exactly 36 congestion spots in the city.

“This is due to the large influx of migrants to Ho Chi Minh City, and the huge number of newly registered vehicles,” he explained.

According to the official, more than 1,000 vehicles of all kinds are registered in Ho Chi Minh City on a daily basis, whereas the city’s traffic space remains unchanged.

“That the sidewalks are largely occupied by shops, stores and street peddlers also worsens the situation,” he said.

“Moreover, of the fatal road traffic accidents, there are more than 100 cases involving pedestrians.”

In response to the report, the municipal transport department said it will enact seven ‘solution groups,’ consisting of a total of 160 specific tasks, to ease congestions.

The solutions include restarting such projects as charging vehicles before they enter the city’s center or collecting car parking fees on several streets, as well as building more traffic infrastructure.

Tran Quang Lam, deputy head of the transport ministry, said his body will try to implement as many as 48 construction projects, including a steel flyover near the Tan Son Nhat International Airport and a roundabout near the An Suong Bus Station in District 12.

However, even when all of these measures are effectively enacted, they will only help reduce the number of congestion spots to 18, Lam admitted.

“The remaining 19 ‘black spots’ should be resolved in the years to come,” he said.