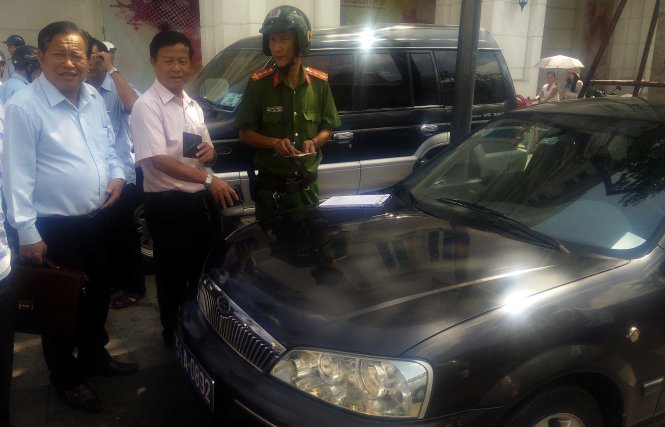 Authorities in District 1, Ho Chi Minh City have proved that in their ‘sidewalk reclamation’ campaign, which has seen numerous car owners fined for parking their vehicles on the sidewalk, no one stands above the law.

The District 1 administration has sent forces to ensure district-wide sidewalks are not occupied by any construction, street food stall or wrongly-parked car since last week.

The crackdown on Wednesday found several ‘special’ violators – leaders of different regulatory bodies who gathered for a meeting with the municipal administration at the City Hall fronting the Nguyen Hue promenade, where parking is prohibited.

When the leaders were attending the meeting, their drivers would wait outside as usual, not knowing that they would be ‘visited’ by members of the ‘sidewalk reclamation’ team, led by District 1’s deputy chairman Doan Ngoc Hai.

At around 11:00 am, the team came to the Union Square building on Nguyen Hue, where some cars wearing blue license plates, indicating they are state-owned, were parked, with their drivers either sleeping inside or chatting with one another in the shady areas nearby.

All drivers were astonished to see officials coming to inform them of the wrong parking, before starting to make excuses, including one that they were waiting for leaders of city-level bodies.

One driver said he was waiting for the leader of the city's Steering Center of the Urban Flood Control Program, which however did not help him get away from a ticket.

Another chauffeur said he did not mean to park his car in the wrong place, but was told to do so by the guards in front of the City Hall, as the allowable parking space there had been full.

The driver was pleading with the District 1 officials for a break when his boss, deputy chairman of the District 9 administration, showed up.

The District 9 leader then talked to his District 1 counterpart asking not to be fined for that “first-time violation.”

However, Hai, the District 1 deputy chairman, insisted that the case be booked as per the law.

A traffic police officer from the inspection team revealed that the wrong-parking violation is subject to fines between VND600,000 (US$26) and VND800,000 ($35), regardless of the violators being public servants or citizens.

The inspectors also towed away one car that was parked in the wrong place, in the absence of its driver.

The team then came to Nam Ky Khoi Nghia Street and booked nine cases of wrong parking, compared to six violators they caught the whole day before.

Deputy chairman Hai has publicly vowed to step down if this ‘sidewalk reclamation’ campaign fails.