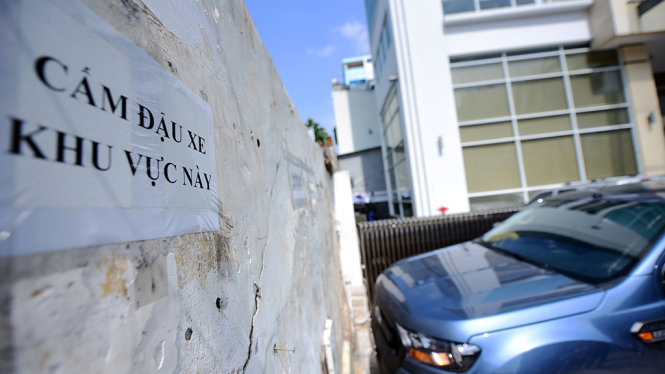 The deputy chairman of Ho Chi Minh City’s District 1 had a busy Thursday after his ‘sidewalk reclamation’ team flattened a wall improperly built in front of a ministry building and slapped tickets on numerous illegally-parked cars.

Doan Ngoc Hai, the district’s deputy chief, has been winning support and trust from city-dwellers since beginning his signature campaign to ensure sidewalks throughout the district remain clear from construction, street food vendors, and illegally-parked cars.

On Thursday, Hai’s team, consisting of traffic police officers and inspectors, soldiered on to clean the street and eventually fine at least 16 drivers for parking violations, including those operating state-owned vehicles.

The team also removed a 3m tall, 2.5m long wall in front of the southern headquarters of the Ministry of Industry and Trade on Nguyen Thi Minh Khai Street that had been blocking pedestrians from using a portion of the sidewalk.

Hai has once again proved that no one stands above the law and anyone violating his clean sidewalk mandate will be punished.

On Wednesday, Hai also insisted that traffic police slap a ticket on the driver of a District 9 leader for defying the prohibition of parking state-owned vehicles on Nguyen Hue Street.

Three of the vehicles were eventually towed after their drivers were unable to be located.

A state-owned car being towed away.

The team also cleaned street stalls that occupied the pavements.

A motorbike of a street vendor being taken away for taking space on the street.

Illegally-parked cars in front of the city's stock exchange.