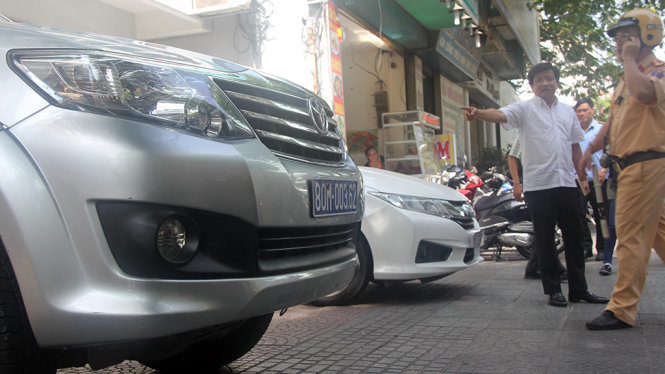 Doan Ngoc Hai, deputy chairman of Ho Chi Minh City’s District 1, has been grabbing the public’s attention over the last few days by leading officials to actively restore order on sidewalks throughout the district.

Reading news of Hai’s signature 'sidewalk reclamation' campaign, one might think that District 1’s deputy chief is either holding a ‘sword of ultimate power,’ or being backed by someone higher up the chain in order to exude such absolute determination.

However, it turns out that the ‘sword of power’ of Doan Ngoc Hai is only the long-established regulations to ensure urban order. Hai is merely the one who applies these rules, and does so with a strong will.

Many have expressed their satisfaction with what Hai has been doing during his campaign. However, there is one other question: Why do we feel happy when an official does what he is supposed to do?

Reclaiming occupied sidewalks for pedestrians – this is an inevitability. However, over the last few years such a certainty has been ‘stolen,' while the existing rules and regulations, though strict enough to deter violators, have not been properly executed.

The campaign, led by the deputy district chief, also leads to a question about ward-level authorities – where had they been before Hai and his officials began their campaign? Keeping the sidewalks and streets clean is the responsibility of these people, rather than those at district levels.

The ‘sword of power,’ or the power conferred by law, is not something granted only to Doan Ngoc Hai, or any one ward- or district-level leader in either Ho Chi Minh City or the country in general.

Every public servant has a 'sword,' but the problem is they have put it inside its sheath for too long, leading to a failure to execute powers within their jurisdiction. This inertia has become commonplace amongst many officials, something which needs to stop.

Hai has gradually been making sidewalks in District 1 more spacious, and increasing the public’s trust in the authorities by properly enforcing the law. But what’s next?

His resolve will ultimately be wasted if his campaign is not followed up by the leaders of District 1’s many wards. The same applies across all districts of the city.

Tuoi Tre (Youth) newspaper raised this question to Le Van Khoa, deputy chairman of the city’s administration, and was told that many other districts are following in the footsteps of District 1 to ‘reclaim’ their sidewalks.

Khoa also promised to hold a meeting with district-level leaders to ensure that those campaigns are resolutely mounted.

We only need the ‘sword of power’ – rules that have been in place for years without being effectively enforced – to solve Ho Chi Minh City’s crowded sidewalk problem.

The other crucial factor is that those who are granted ‘the sword’ must use it swiftly and resolutely.