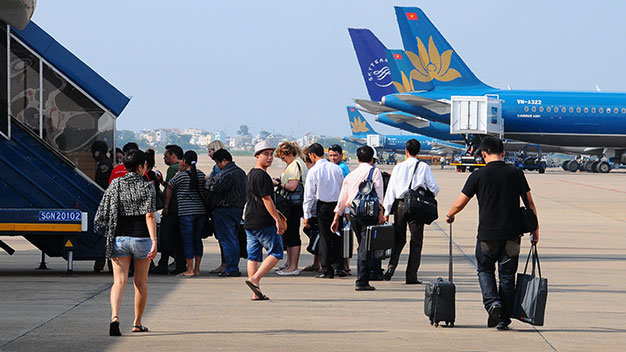 A Chinese national aboard a Vietnamese aircraft was caught attempting to steal from another passenger.

Dai Da Peng, a 26-year-old Chinese national, was detained by police in Ho Chi Minh City on Thursday after being caught red-handed attempting to steal money from another passenger.

According to the case file, Dai was traveling on Vietnam Airlines flight VN 217 from Hanoi to Ho Chi Minh City on Thursday when he noticed H.T.H, the Vietnamese passenger seated in front of him, was busy eating breakfast.

Attempting to take advantage of the situation, Dai took VND13 million (US$566.4) from H.’s handbag and hid it inside his jacket before heading to the restroom.

Another passenger spotted the incident and reported the case to flight crew.

The flight attendant approached the Chinese man after he exited the restroom and discovered the cash hidden inside the lavatory.

This is not the first time Chinese passengers were caught stealing assets on board Vietnamese flights.

On November 24, Min Li Yong, passenger of a Vietnam Airlines flight flying from central city of Da Nang to Ho Chi Minh City, attempted to cut his way into another flyer’s suitcase using a pocket knife to steal his property.

Earlier the same day, Wang Qingjian was arrested after he was caught stealing over VND400 million ($17,588) in cash from a Vietnamese passenger and hiding it in his own suitcase.