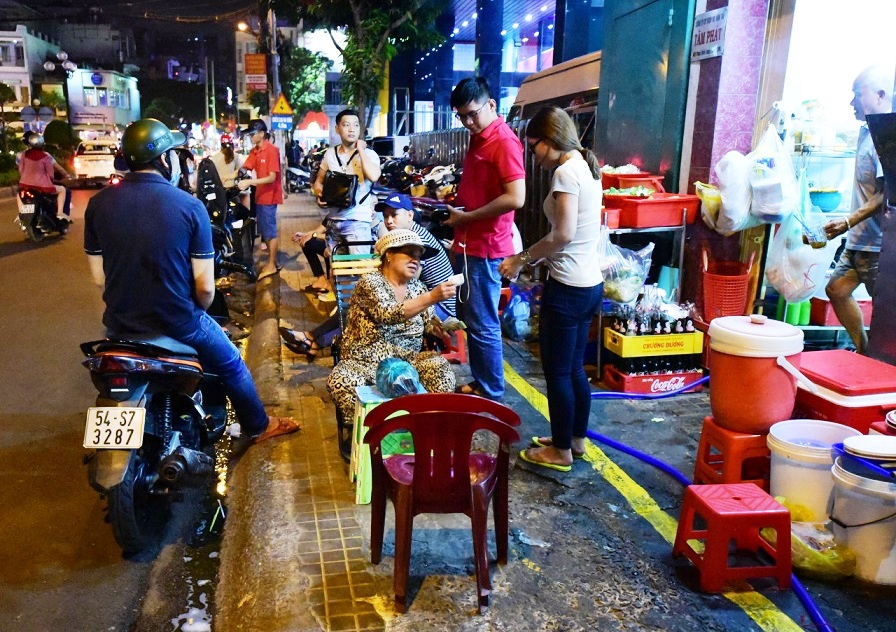 As part of the ongoing ‘sidewalk clearing’ campaign sweeping through the southern hub, yellow lines have been painted on promenades over three meters wide to separate public walkways from sidewalk business zones.

Accordingly, citizens living along each street are permitted to operate businesses on one side of the yellow line, while the other side is exclusively reserved for pedestrians.

However, some residents seem to have missed the memo and instead continue to occupy the entire width of certain sidewalks.

According to the observation of Tuoi Tre (newspaper) reporters on Truong Chinh Street, District 12, space marked by the yellow paint originally intended for customers to park motorbikes in front of local shops seems to have lost out to shopkeepers using the area to display products and advertisements.

The result is customers being forced to park vehicles in pedestrian areas.

The situation extends to 3/2 Street in District 10 and Lac Long Quan and Ly Thuong  Kiet Street in Tan Binh District where some facilities force customers to park their motorbikes on roadways so businesses can occupy entire pavements.

“We just temporarily borrow the sidewalk so we can run a smoother business,” Thanh, a shopkeeper on Ly Thuong Kiet Street, said.

According to Phan Vu Son, chairman of the People’s Committee in Ward 12, District 10, a team of officers will be charged with day and night patrols on 3/2 Street to deal with businesses which choose to encroach on public sidewalk space.

Vo Khac Thai, chairman of District 3, affirmed that local shops should organize their space to allow customers to park on the right side of the sidewalk.

Businesses will be held responsible for customers forced to park vehicles in pedestrian zones, Thai added.