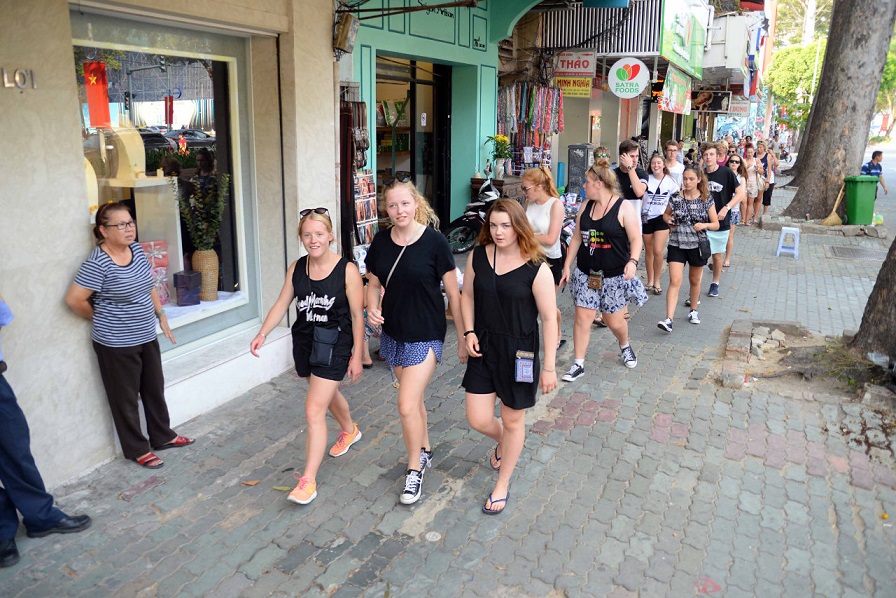 A proposal has been submitted to transform many streets in downtown Ho Chi Minh City into footpaths, with all personal vehicles banned from entering the area.

The municipal Department of Transport has tasked the Urban Traffic Management Unit No.1 with developing a project that will establish a 221-hectare pedestrian area in the city’s center.

To help commuters and tourists affected by the change, parking lots will be set up along the perimeter of the zone and public transportation such as electric buses and monorails will also be provided within the area.

A similar plan was previously laid out by the municipal People’s Committee in 2012, proposing a walking area of about 930 hectares, including four main sections, in the downtown area.

However, the scheme was never executed.

According to Tran Quang Lam, deputy director of the municipal transport department, the recent sidewalk clearing campaign has created favorable conditions to carry out the plan.

Local officials have been aggressively removing obstructions on city sidewalks in a drive approved by the top leaders over the last two months.

Lam elaborated that the initiative will be piloted on streets with higher viability such as Dong Khoi, Le Duan, Le Loi, and Nguyen Hue – already a pedestrian street.

It will then be expanded to other streets in the area according to a specific schedule.

During the first phase, such routes will only be used as walking streets on weekends and holidays, the official said, adding that they will eventually be transformed into full-time pedestrian roads.

Competent authorities are also considering the project’s impact on local residents and the socio-economic status of the area.

Many entrepreneurs and small business owners in the area have openly expressed their support for the proposition.

The establishment of the pedestrian zone will indeed pose a challenge for people who often travel by motorbike or car, Do Hong Ngoc, owner of an eatery on Do Quang Dau Street, said, adding that that he believes it will attract more local and foreign visitors to the area, thus benefiting local businesses.

Ngoc said she is willing to park her bike outside of the pedestrian zone despite living and working in the area.

Chu Khac Hieu, owner of a handbag shop on De Tham Street, also agreed to the idea, provided that sufficient parking and public transport are offered to residents.

Meanwhile, others living and working in the affected neighborhoods are still unsure of how they will travel without their personal vehicles.

Many worry that parking space will be too limited and potential traffic jams will occur along the boundary of the zone.

Electric buses and monorails should be designed to reach many destinations in the vast pedestrian areas, others suggested.