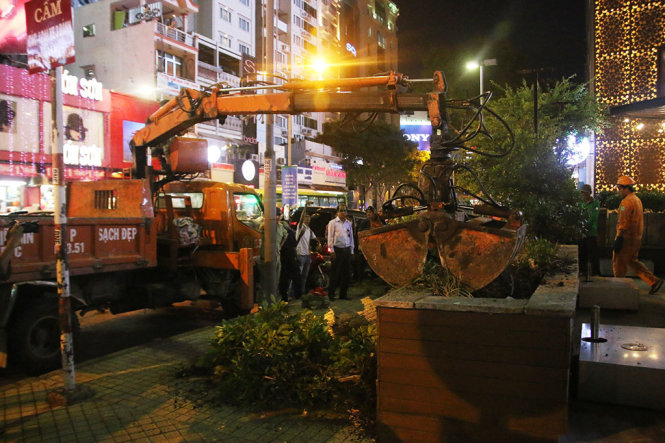 A five-star hotel in downtown Ho Chi Minh City and its next-door Starbucks outlet had their concrete steps and flower and ornamental tree boxes destroyed for blocking the pavement in Wednesday’s latest ‘sidewalk reclamation’ crackdown.

District 1 deputy chairman Doan Ngoc Hai, leader of the campaign, led his team to New World Saigon Hotel, a five-star hotel fronting three streets just 500m away from Ben Thanh Market, to check whether or not the 11-step stairway in front of the venue had been removed as previously requested.

The team had demanded on Tuesday that New World Saigon Hotel demolish the structure and clear the walkway for pedestrians.

When Hai’s team arrived, the steps had not been completely removed and the demolition team was ordered to do the job, with the hotel footing the bill.

I don’t agree with you. You’ve earned tens of millions of dollars for the past few decades from illegally expanded structures.

I used to run businesses, so I’m speaking from experience.

No more arguments. I have to do my work. I will not stop.

If New World had complied with regulations, they would have removed the illegal structures during the past two months. My statements have been very clear.

Your structures take up a lot of sidewalk space in association with dozens of those shops.

Over the past few decades you have made tens of millions of dollars.

Mr. Duc from your company agreed in this document that he would voluntarily remove the illegal structures.

If the structures are legal, why do you think you have to agree to their removal? Do you really have sufficient authorization to deal with this case?

The problem is that there is an oil tank underneath the structure so we’d like to do it ourselves.

We will remove just the upper structure. I’ll give you a deadline to remove the rest.

The structure is right on an oil tank, so we need to be careful. We guarantee that we will do it. I’ll show you the lid of the oil tank right now.

Why do you keep making up excuses? Now, with the oil pipe…

I have explained to you very clearly. If you want the structure to be removed, let’s us do it to ensure safety.

You have a look at this “Voluntary removal”…

We spent over US$2 million helping renovate this run-down area with all the kiosks in the past. Our company has no intention of taking up public space and causing monetary losses to the city.

You can’t say that. If the steps had been built properly, you would have less space and thus the renting fee would be significantly lower. For example, instead of earning US$10,000 per month, you’d be earning US$6,000 per month. If you multiply that by 20 years, then you see.

But we also pay taxes to the government from our profit…

You can’t say that. Don’t mix up different things. You need to focus on the public benefits of over 13 million people in this city, not of New World. Let me show you the road limit line.

Why don’t you show him the building blueprint with approval from the Department of Construction?

I did show him.

I have checked the legality of your document. You don’t understand the issue. I have wasted so much time explaining everything to you. Your hotel literally takes up a huge amount of public space at this corner.]

A representative for the New World Saigon Hotel arrived on site and pledged that the hotel would do the removal work on its own, warning that the oil tank located beneath the concrete steps could endanger those involved in the removal process.

The plea fell on deaf ears, with Hai insisting the steps be immediately removed and agreeing that his team would only clear the surface part of the structure.

A deadline was given for the hotel to handle the underground part of the project.

Next door, the ‘sidewalk clearing’ team found that the concrete flower and ornamental tree boxes in front of a Starbucks store were built beyond the hotel’s zoned space and had to be removed.

Located on Le Lai Street, the offending outlet was the first Starbucks location in Vietnam when it opened in 2013.

The flower and ornamental tree boxes in front of the Starbucks outlet after the removal is seen in this photo shared on Facebook.

One of the cars was ready to be towed when the owner showed up. Hai agreed to let the owner take the car only after issuing a ticket.

A car is being towed away before its owner shows up in the last minutes.