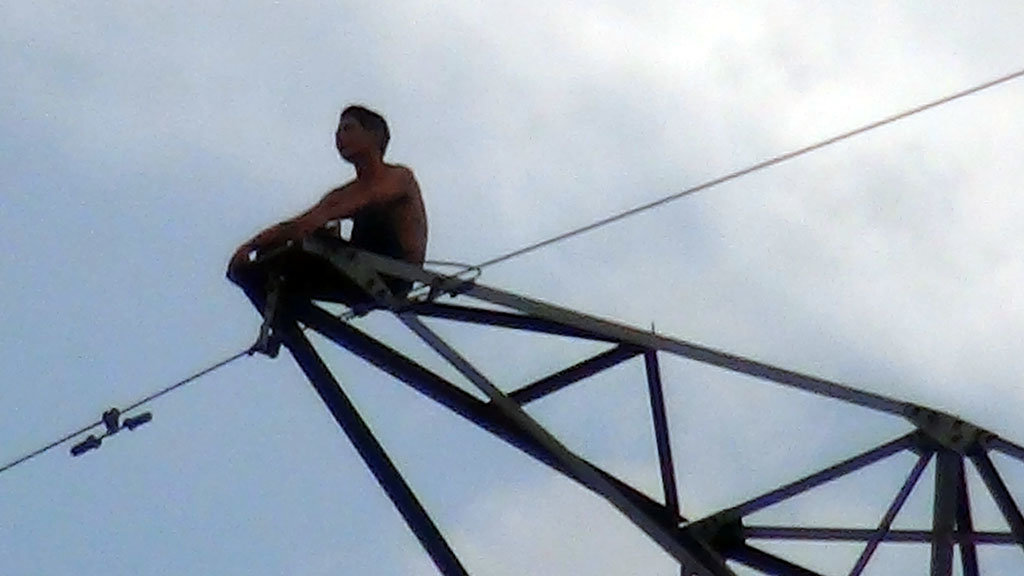 A Vietnamese man climbed to the top of a 46-meter-high electricity pole on Saturday, forcing authorities to shut down power supply to many industrial parks in order to ensure his safety.

The structure, about 46 meters high, is part of the 220-kilovolt overhead power line stretching from My Phuoc Ward in Ben Cat to Tay Ninh Province.

As of 4:00 pm the same day, authorities were still figuring out a way to rescue the man.

Spotting the man atop the power pole, residents notified local officials, who arrived shortly after to convince Bay to get down.

Tens of rescuers were dispatched to the scene, talking to the man through a loudspeaker while setting up a safety cushion to prepare for the worst-case scenario.

Bay refused to climb down and continued yelling, “life is not fair!”

According to Power Transmission Company No. 4, which operates the power line, the local power supply had to be shut down since 2:00 pm to ensure safety for the man, resulting in a mass blackout at many industrial parks in Binh Duong and Tay Ninh.

At around 7:30 pm, Bay climbed down the post, before electricity supply was restored.

Initial reports showed that the man had applied for a job at a local construction site on Saturday morning and he was turned down.

He then returned to his tenanted house and started drinking, before telling his friends about his intention to commit suicide.

In other news, Nguyen Vu Truong, 30, climbed up the roof of a two-story house in the Mekong Delta province of Tien Giang at around 8:00 am on Saturday.

Competent authorities managed to bring the man down at 11:00 am the same day. Truong was showing signs of being high on drugs.