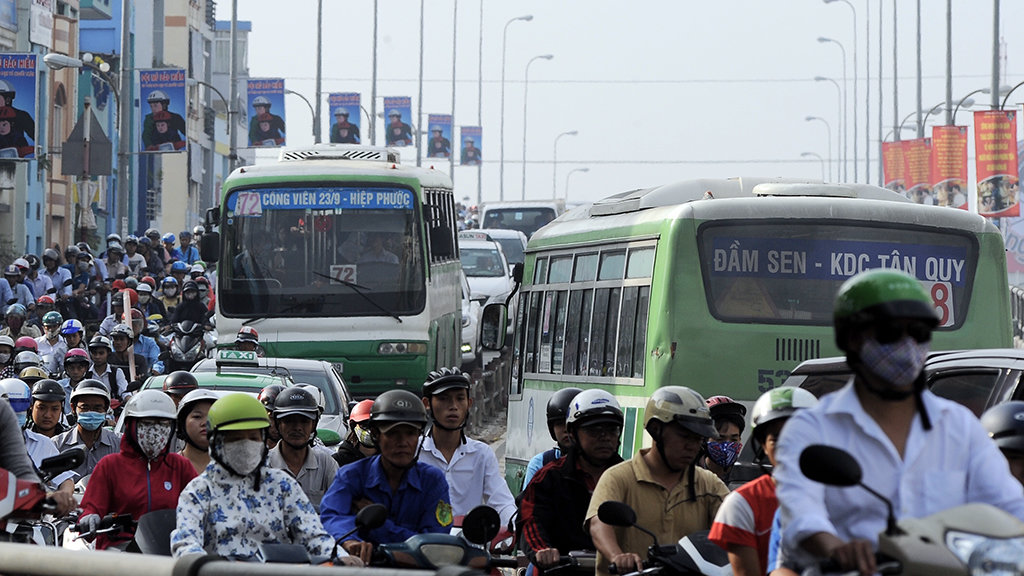 Experts in Ho Chi Minh City have suggested a complete ban on motorcycles by the year 2030 as a permanent solution to current traffic problems in the southern metropolis.

During a conference organized in Ho Chi Minh City on Thursday, several experts considered the overall removal of motorbikes in the metropolis as a revolutionary approach to improving the local traffic situation.

Associate Professor and Doctor Pham Xuan Mai, a specialist on traffic with over ten years of experience, backed the idea by asserting that motorbikes are the “main culprit” behind traffic accidents.

Each year in Ho Chi Minh City, 71 percent of traffic accidents involve the use of motorcycles, Mai elaborated.

The large numbers of these personal vehicles also take up too much space, the pundit continued, explaining that the 26 million square meters of the city’s streets are only capable of housing 80 percent of the current motorcycles owned by its residents.

Chairing the meeting, Dr. Nguyen Ngoc Giao, president of the city’s Union of Science and Technology Associations, stated that the current traffic situation would be significantly reduced if local authorities had implemented the ban 20 years ago.

Supporting the viewpoint, Dr. Tran Du Lich warned that the opening of several metro routes would not be enough to resolve the current congestion.

Lich suggested a 10 to 15 year process before the complete prohibition of motorbikes, adding that authorities can first limit the convenience of the vehicles by prohibiting parking on sidewalks.

Dr. Mai agreed on “frustrating” motorcyclists by charging extra fees on the purchase and use of motorbikes on the city’s streets, as well as preventing parking in downtown areas and along sidewalks.

“Some people may say this approach will be a challenge for poorer citizens. I say we cannot use poverty as a scare tactic,” Mai asserted.

“Vietnam is no longer a poor country and is striving for breakthrough development. Tolerating the use of motorbikes is putting the brakes on these efforts” the expert elaborated.

Damages caused by motorcycle accidents are estimated at US$6.1 billion each year, accounting for 13.4 percent of the city’s GDP, he added.

Concluding the conference, the Ho Chi Minh City Union of Science and Technology Associations prepared a formal proposition to submit to the city leaders.

The document suggested competent authorities lay out a progression plan for a complete ban on motorbikes by the year 2030 and suggesting that the removal first be applied in downtown areas before expansion across the rest of the southern hub.

Limits should be put on the personal vehicles by sharply increasing parking fees, imposing additional charges for motorbike registration, and prohibiting dilapidated vehicles.

The expert also recommended that public transportation, such as bus, metro, taxi, and river bus, be improved and promoted by 2030.

Director of the municipal Department of Bui Xuan Cuong said that the agency would accept the initiatives and evaluate them before asking for approval from the People’s Committee.