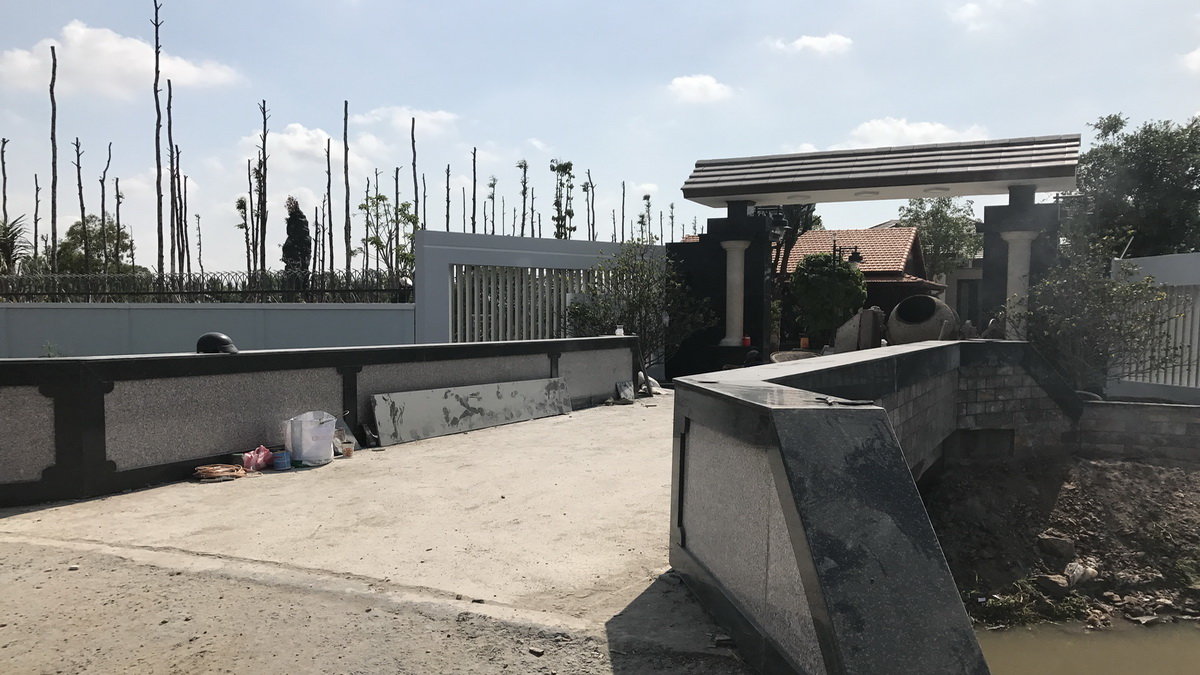 The construction of a villa belonging to the director of a state-owned water company in the Mekong Delta province of Soc Trang has been permanently suspended due to lacking a proper building permit.

The provincial People’s Committee on Thursday afternoon ordered that construction on a villa belonging to Dang Van Ngo, chairman and general direction of Soc Trang Water Company, be suspended indefinitely.

Authorities involved in the matter have scheduled a meeting for Monday next week to review the case and determine a suitable penalty.

Ngo has also been asked to write a report of his own violation, Huynh Van Sum, deputy secretary of the Soc Trang Party Committee, said, adding that a stern punishment is expected to be imposed.

The bridge crossing the fish pond in the front yard of the facility. Photo: Tuoi Tre

In early 2016, the company director began constructing a 5,800 square meter villa on the land –  adorned with high walls and fences, a bridge over a fish pond, miniature green trees in the front yard, and a cabin built from high-quality wood using subtle architecture.

The villa itself consists of a main hall and two subsidiary houses.

The nearly completed project was under construction for over a year before authorities reacted to Ngo’s permit violations.

Meanwhile, Ngo never submitted a request to transfer the land’s purpose from agricultural production to housing.

The wooden cabin in the front yard of the villa. Photo: Tuoi Tre

This is the second case this year in which a state official was found to be building a luxury house in violation of Vietnam’s construction regulations.

In early March, a villa belonging to Nguyen Sy Ky, deputy head of the Commission for Internal Affairs in the Central Highlands province of Dak Lak, was found to be illegally built on land strictly zoned for agricultural purposes.

Ky eventually defied an order to voluntarily demolish his two-story house, explaining that the property had been funded by his life-long savings.

“I worked part-time as a xe om driver at night while I was an official at the provincial inspectorate,” he elaborated.