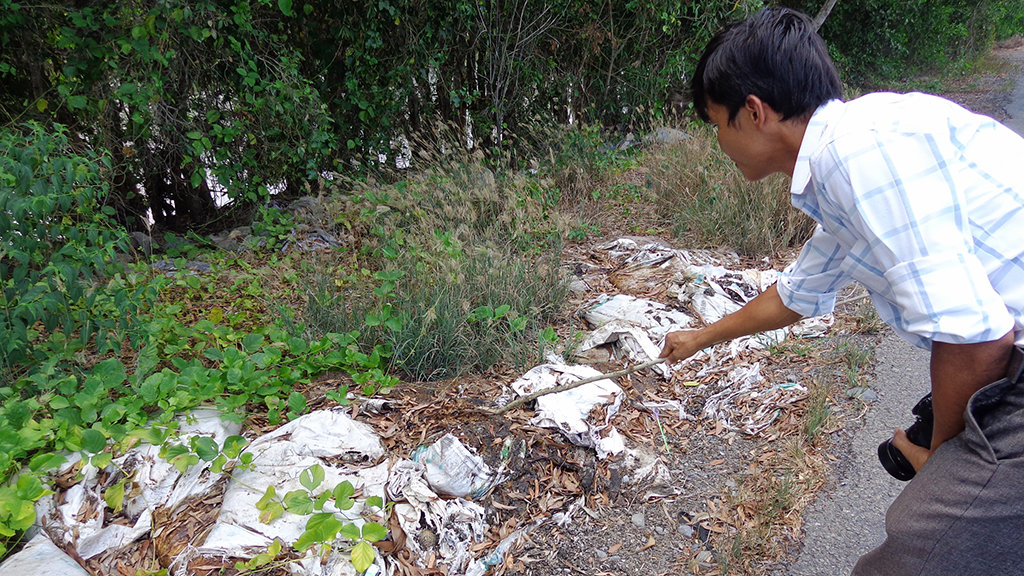 Over 200 metric tons of garbage has been found buried at a house in the Mekong Delta Province of Tien Giang, resulting in serious pollution to the local environment.

A local business has been paying a couple in Thanh My Commune, Tan Phuoc District, to bury its waste at the yard of a local resident, creating a foul smell and polluting the neighborhood.

According to Duong Quang Vinh, 29, he and his wife were hired by a man named Duy for the illegal burial of the trash.

The garbage was transported by Duy from Ben Tre Province, also in the Mekong Delta, to a meeting point location in Tien Giang, before being carried by the couple to an empty piece of land owned by V.H.T..

The location was 2,400 square meters in area and was covered with thick vegetation.

The activity has been carried out since July 2016, Vinh added.

“Duy said the waste was fish bones, but the smell was unbearable,” Vinh called.

Despite being buried under a thick layer of soil, the odor was overwhelming, creating a firm reaction from local residents.

Duy had wired a total VND20 million ($882) to Vinh’s ATM account, but as he stills owes the couple VND2 million ($88.2) the deal was ceased and several bags of garbage remain at the meeting point.

According to the observation of Tuoi Tre (Youth) newspaper reporters, the trash didn’t contain fish bones, but rather some kind of dried, dark-colored waste.

The incident was not acknowledged by local authorities until recently.

Police in Tan Phuoc District confirmed on Tuesday that they were clarifying the name of the company in question.

Vinh, his wife, and T. have been asked to stop burying waste at the vacant plot of land.