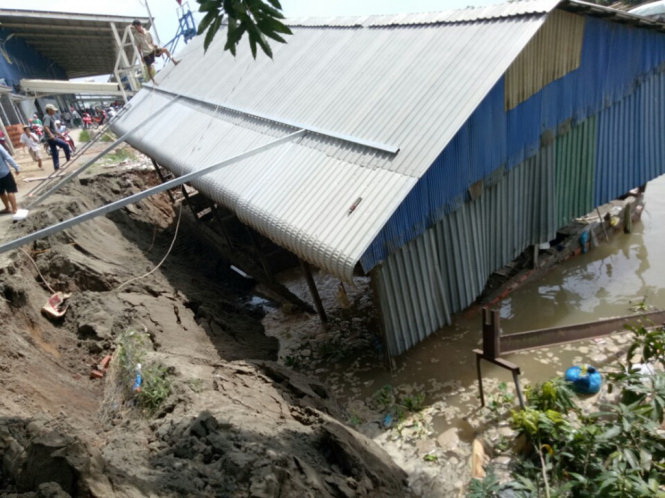 Following recent land collapse in the southern Vietnamese province of An Giang, large sections of riverbank in the same area and another province subsided on Friday, sinking three other dwellings.

The subsidence occurred at around 9:00 am on An Thanh Islet in Hoa An Commune, Cho Moi District, Nguyen Van Tam, the commune’s deputy chairman, confirmed.

The collapse, on a tract measuring almost 30 meters in length and over 10 meters in depth, shoved a coffee shop owned by Tran Quoi Thien, a local resident, into the Hau (Back) River, one of the two major rivers of the Mekong Delta.

Damage was estimated at VND70 million (US$ 3,050). Thien was pouring concrete and pumping in sand to smooth the floor of his coffee shop when the collapse happened, Tam added.

“The area, which is in close proximity to a grinding mill and has seen heavy waterway traffic, is at high risk of land subsidence. Luckily Thien had removed his assets from his home, otherwise he would incur heftier damage,” he noted.

The site of land subsidence that occurred along the Ba Lang River in Chau Thanh A District, Hau Giang Province also on May 5, 2017. Photo: Tuoi Tre

Residents in the high-risk site of the Saturday collapse had been asked to evacuate since early this year, he added.

A 3.5m-50m road section which runs along the Ba Lang River in Chau Thanh A District, Hau Giang Province, also gave way around the same time on Friday morning.

The collapse caused trees and fences in front of local homes to stumble down into the river, and knocked over a utility post, resulting in an outage in the area.

Reinforcement to the road section has just been completed to cushion it from subsidence.

The incident wreaked havoc on two dwellings, with damage roughly estimated at a few hundred million dong (VND1 million is equivalent to $43.6).

Barricades have been erected at the two ends of the road, while traffic has been diverted onto a makeshift street.

Severe land collapse along the banks of the Tien (Front) River and Hau River, the two major rivers of the Mekong Delta, and other waterways in the region have been recorded in recent times, putting the lives and property of hundreds of residents in jeopardy.

In the latest incident, serious subsidence happened late last month along a part of the Vam Nao River in My Hoi Dong Commune, Cho Moi, An Giang, swallowing 14 houses in the process.

Residents in the affected areas tend to attribute the problem to the excessive exploitation of sand in the river sections, while some local experts have asserted that the collapse occurred naturally, adding that it would persist in the future and be exacerbated during flood seasons.