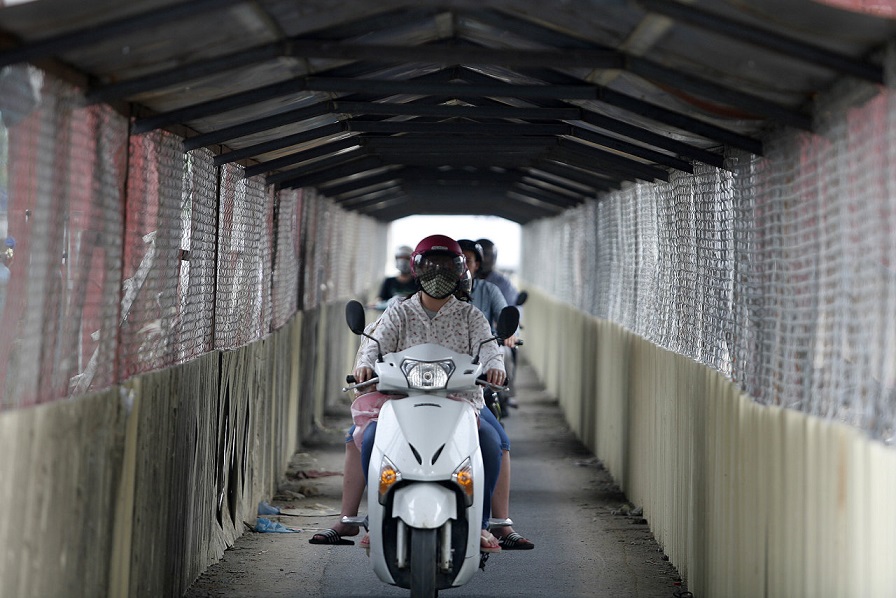 To ease traffic congestion, motorcyclists in Hanoi have been allowed to drive inside a makeshift tunnel below the ongoing construction of an elevated railway.

The construction unit of an elevated railroad project have created a temporary traffic tunnel at the Nhon intersection in Bac Tu Liem District in Hanoi.

The tunnel is about 100 meters long, two meters high and two meters wide, and is fortified by a metal roof and frame. It has been reserved for one lane of motorcycle traffic.

According to local residents, the structure was established about a month ago after the construction of the elevated railway had begun causing regular congestion.

Speaking with Tuoi Tre (Youth) newspaper on Tuesday, Nguyen Viet Sang, chief supervisor of the railroad project, said that the execution of the plan had required a blockade of the area, resulting in severe traffic bottlenecks.

“To combat the problem, we decided to design a path for motorbikes to travel through under the construction,” Sang said.

“The measure was properly researched and tested and is guaranteed to be effective,” he continued.

Sang gave assurances as to the safety of the temporary tunnel, adding that it had been approved by the municipal Department of Transport.

People travelling in the passageway still feel uncertain about their safety however, as the construction of heavy concrete and metal continues to be carried out immediately above the structure.

In addition, the tunnel exits at a juncture in the road where motorcycle and car lanes meet, posing a high risk of accident.

Only one lane of motorcycles are allowed in the passageway. Photo: Tuoi Tre

The structure lies directly beneath the busy construction of an elevated railway. Photo: Tuoi Tre