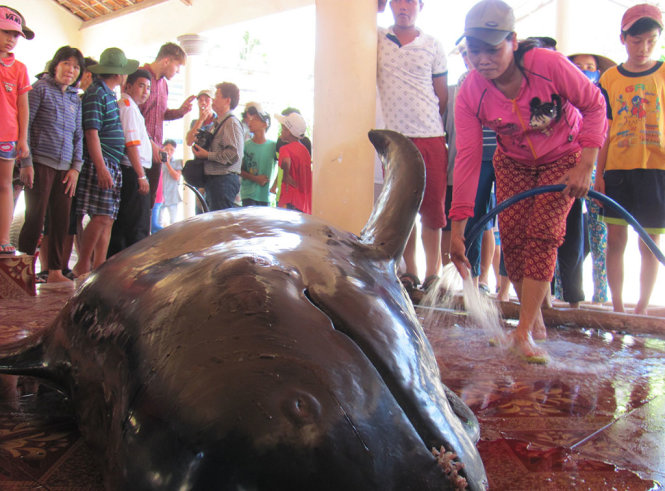 A dying whale washed ashore in the south-central province of Phu Yen on Tuesday morning, and despite rescue efforts by local fishermen, eventually died the same day.

The animal, measuring 4.5 meters long and weighing more than one metric ton, was found close to death by villagers at around 8:00 am.

Villagers attempted to bring the whale back to the ocean, but she was too weak to move, having suffered three deep wounds on her body.

Locals then carried the whale to a nearby whale-worshipping shrine, where she died shortly after.

Whales are believed to be sacred by Vietnamese fishermen, who call the animals ' sir' or 'madam' as a mark of respect. This particular whale was called “Sir Bell” by locals, as it resembled a bell with a round head and thin tail.

Villagers held a respectful burial for the whale as per Vietnamese tradition and then worshipped at the shrine.

Fishermen visit the whale shrine before they go to sea, in the hope that it will protect them against misfortune at sea.

The village leader later confirmed that this was the biggest whale to ever wash ashore in the area.

Earlier this month a 700kg whale was found washed ashore on the beach in nearby Quang Ngai Province.