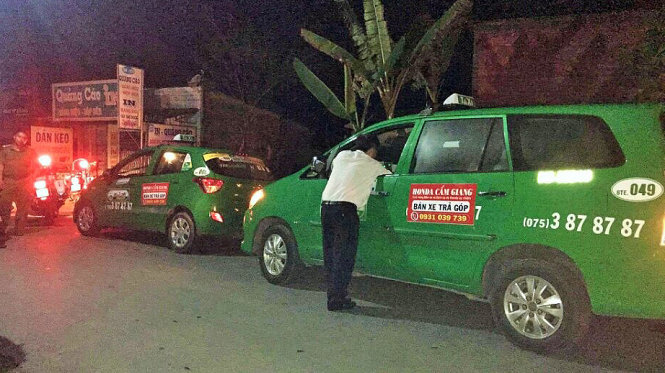 A thief attempting to steal a Mai Linh taxi is in police custody after being chased by cabbies for hours through the southern province of Ben Tre early Thursday morning.

Ho Anh Thuc, director of the Ben Tre branch of Mai Linh, confirmed that one of the company’s cars was stolen shortly after midnight on Thursday.

The taxi operator contacted police and dispatched ten cabs to chase the thief.

According to Mai Linh Ben Tre’s account, at 0:30 am, Nguyen Tuan Hiep hired a Mai Linh cab to pick him up at a karaoke parlor on National Highway No.60. Just minutes into the ride, Hiep was asked to leave the car after telling the driver that he had no money.

After exiting the cab, Hiep walked along the highway before hailing another Mai Linh taxi.  He refused to tell the driver his destination and was subsequently refused a ride.

He then continued walking until he saw another Mai Linh cab parked along the street near the Ben Tre Bus Station and notice the driver was relieving himself.

Taking advantage of the situation, Hiep jumped behind the wheel and sped away, leaving driver Le Sanh Quoc in shock. Quoc immediately reported the theft to the Mai Linh call center, which later dispatched ten other cars to chase the thief.

Despite hitting a mile marker, bursting a front tire, and crashing into one of the cabs chasing him, the thief refused to give up.

The thief at the police station