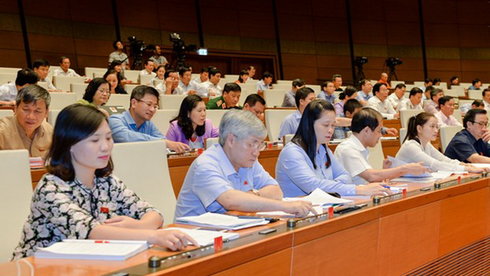 The lawmaking National Assembly (NA) of Vietnam passed a law on Tuesday amending the country’s Penal Code, in which lawyers are required to reveal previously confidential information in cases concerning national security and public order.

The law was passed 434 to 19, with four NA members abstaining from the vote.

With the approval of almost 90 percent of the legislative body, the Law on Amendment of the 2015 Penal Code of Vietnam was passed and will take effect from January 1, 2018.

According to the legislation, lawyers can be incriminated if they fail to denounce their clients in the event that they happen to learn of information concerning matters of national security and public order.

“The [Vietnamese] government’s decision not to fully exempt lawyers from all legal liabilities stems from the ultimate goal of safeguarding national security, public safety and order, and the common good of the community,” said Le Thi Nga, head of the NA Legal Committee, who presented the legislature’s explanatory report before voting began.

“Therefore, in certain cases, lawyers will be criminally liable for not denouncing their own clients.”

According to Nga, countries such as Thailand, China, Germany, Sweden, the U.S., Canada and Spain all have regulations forcing lawyers to reveal certain information regarding their clients with the purpose of protecting the greater good of the nation and society.

The amendment had been heatedly debated by NA members in the weeks leading up to the landmark vote, with opponents of the law arguing that it would be devastating to the client-lawyer confidentiality agreement.

The new law also dictates that citizens between 14 and 16 years of age can only be convicted of crimes of an extremely serious nature, a move regarded to be in accordance with the United Nations Convention on the Rights of the Child (UNCRC), of which Vietnam is a signatory.