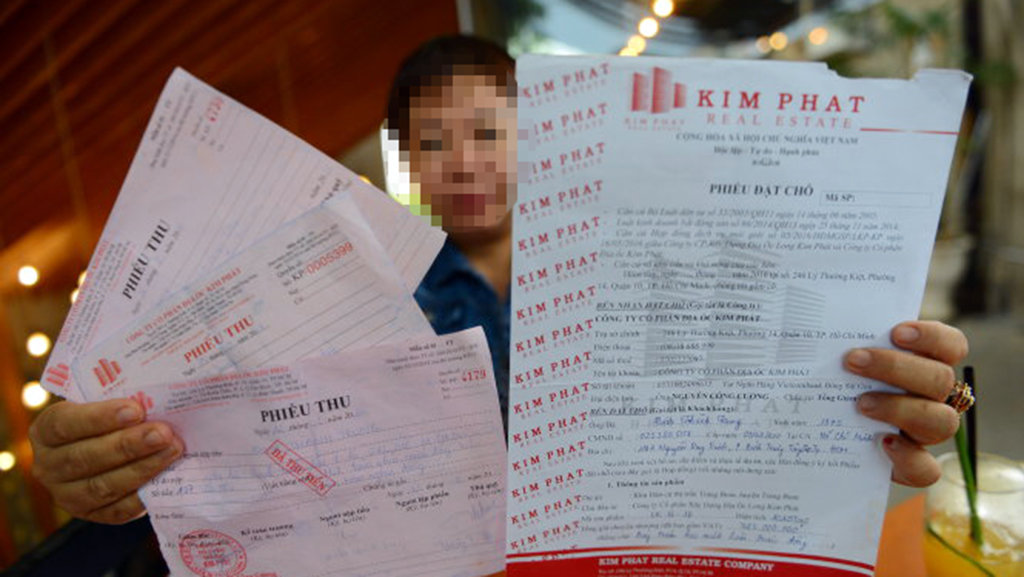 Many have reported realty agents walking them into financial traps before attempting to claim no responsibility or even threaten their customers with violence if they try to seek justice.

In one recent scam, Kim Phat Real Estate JSC, located in District 10, signed a deal regarding a residential project in the southern province of Dong Nai with the locally based Long Kim Phat Company in May 2016.

According to their agreement, Kim Phat would act as an intermediary to help Long Kim Phat sell the properties to the former’s clients, and in return receive a commission worth 12 percent of the price.

However, the Ho Chi Minh City-based firm unilaterally raised the price of the properties and claimed the difference from customers.

This meant that the firm pocketed an additional VND202 million ($8,879) without the buyer or seller knowing.

“I was startled after discovering the real price of the properties. The company also refused to pay me back the extra amount,” T. complained.

An investigation by Tuoi Tre (Youth) newspaper revealed that the realty company had acted as mediators in several real estate projects in Dong Nai and the Mekong Delta province of Long An.

Other real estate agencies have been discovered selling properties without the necessary legal paperwork.

Hien wired some VND720 million ($31,648) to the firm, but did not receive the legal title documents of the properties as agreed.

The buyer traveled from Binh Duong to Ho Chi Minh City several times to address the problem but the effort always ended in vain.

On May 25, while Hien and some of his relatives were waiting for their meeting with Viet Hung Phat at a nearby coffee shop, they were attacked by a group of men.

The assailants only stopped their assault and escaped once police arrived at the scene.

Le Huong Son Company, developer of the project, is yet to finish its procedures to take over the properties.

The company, however, signed a deal with Viet Hung Phat in December 2016 to offer the assets to buyers.

In another case, Viet Hung Phat opened a fair at Tao Dan Park in District 1 on May 28, introducing its clients to a real estate project in District 9.

When the event began, the firm changed the target of their sale to a project in Dong Nai Province, claiming that the original project had been delayed.

With persuasive speeches and tight coordination between the company’s agents, many participants were convinced to pay for the properties.

The buyers were then told to wait for some time before the legitimate paperwork proving their ownership was issued.

According to Pham Van Du, a police official in District 10, many people have reported being scammed by Viet Hung Phat since 2016.

It is common that the firm’s headquarters are filled with angry clients demanding recompense, Du added.