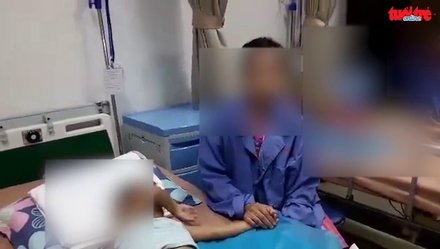 The woman who performed unlicensed circumcisions on dozens of boys in northern Hung Yen Province, passing on genital warts, is a physician assistant, health inspectors have found.

As of Wednesday, the number of underage patients – some as young as 6.5 months old – known to have contracted the sexually transmitted disease at the quack doctor’s clinic has risen to 40.

On Tuesday, it was reported that 37 boys in Hung Yen had developed genital warts after undergoing circumcisions at an unlicensed clinic in the province.

The boys were admitted to the National Hospital of Dermatology and Venereology in Hanoi between May 1 and July 15.

Genital warts are symptoms of a contagious disease caused by the human papillomavirus (HPV), which is typically transmitted between adults during sexual intercourse.

On Monday and Tuesday, three more patients from Hung Yen were taken in by the hospital with symptoms of the disease, raising the total number of boys treated for genital warts to 40.

Provincial health inspectors on Tuesday met with Hoang Thi Hien, the woman who ran the private clinic in Hung Yen’s Khoai Chau District where the boys had been treated for their phimosis condition prior to developing genital warts.

Hien is a vocationally trained physician’s assistant who is employed by the health station of Me So Commune in Hung Yen’s Van Giang District.

In Vietnam, those who receive medical training at vocational schools are not qualified to open their own clinics, and can only act under the supervision of a qualified doctor.

Despite this, Hien has reportedly been running the unlicensed clinic in her home in Hung Yen for many years, and has even gained popularity among local parents as a ‘doctor who can treat all diseases’.

Parents who trusted Hien with their children said they were convinced that she was a qualified doctor at a major hospital in Hanoi.

During Tuesday’s meeting with health inspectors, Hien denied these accusations, claiming she had only recently opened the clinic, according to Leu Van Quan, chief inspector of Hung Yen health department.

Nguyen Thanh Liem, a leading expert in pediatric surgery, said the preferred treatment for phimosis in children is applying topical creams, and that invasive procedures should only be a last resort for patients older than one year.

However, Hien has gone ahead with the circumcision of underage phimosis patients as young as 6.5 months old, despite the fact she is not qualified to perform the procedure.

Hien can also be charged with practicing medicine beyond her authority and selling drugs without a license, Quan added.

“The irresponsibility of local authorities to allow such an unlicensed clinic to operate in broad daylight should also be taken into consideration,” a legal expert from the Ministry of Health told Tuoi Tre (Youth) newspaper.

The official advised parents whose children had fallen victim to Hien’s clinic to come forward and demand compensation for the damages and press charges against the unlicensed physical assistant.