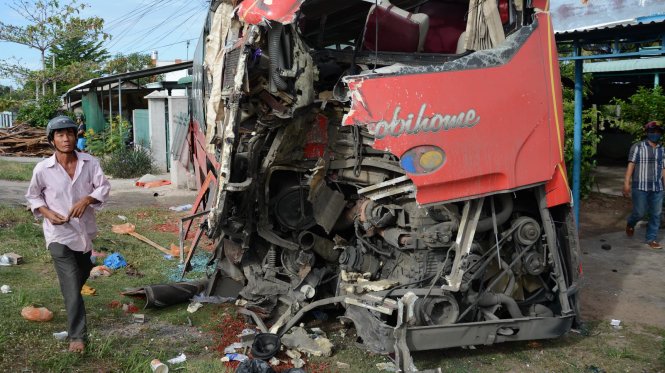 Three people were killed and many others were injured in a pile-up involving three passenger buses in the southern province of Binh Thuan at first light on Wednesday.

According to initial information, a Kim Thanh passenger bus was driving on National Highway No.1, passing through Ham Thuan Bac District on its north-to-south journey, when it had to stop on the street to fix its headlights.

However, the vehicle was immediately struck from behind by a passenger bus operated by Hai Lai Co., causing the Kim Thanh bus to crash into the fences of some houses around 50m away before coming to a complete halt.

The Hai Lai bus smashed into the median strip before crashing into a third sleeper bus.

The accident claimed the lives of Nguyen Van Sy, 27, a passenger who was sleeping at the rear of the Kim Thanh bus, and two Hai Lai passengers, Truong Minh Phong and Nguyen Xuan Hung.

Around ten other passengers on both buses were hospitalized with multiple injuries.