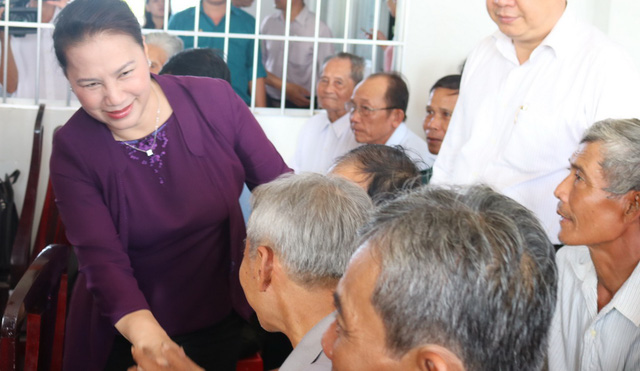 Mixed-race children in Vietnam must be able to go to school: NA chair

The chairwoman of Vietnam’s lawmaking National Assembly, Nguyen Thi Kim Ngan, on Wednesday addressed concerns that interracial parents in Vietnam are facing difficulty acquiring the necessary papers to send their kids to school.

The issue was announced during Ngan’s meeting with constituents in southern Can Tho City.

According to Colonel Tran Ngoc Hanh, chief of Can Tho Police, there are currently over 1,300 children with mixed-race backgrounds living in the southern city, most of whom have a Taiwanese or South Korean parent on one side and a Vietnamese parent on another.

Despite efforts by the municipal Department of Justice and the Department of Education and Training to provide legal support to these children, as many as 402 of them are still out of school due to their lack of identification papers.

“In most of these cases, it is the parents that are reluctant to sign their kids up for school due to worries over their lack of papers,” Hanh explained.

“We will continue to find ways for these children to attend school. Papers can be completed later.”

Nguyen Thi Kim Ngan stressed the consistent view of Vietnam’s National Assembly that every child must be allowed to attend school, including children of mixed-race backgrounds.

Ngan has asked the police chief of Can Tho and the municipal administration to help these children access formal education and begin learning to speak their mother tongue.

Many women in the Mekong Delta have had their lives shattered after broken marriages with men from China, South Korea and Taiwan.

They got married to the men via matchmaking in the hope of a better life and earning money from these 'wealthy husbands' to send home to support their poor families.

But their hope tended to be destroyed as they found out that many spouses were not as wealthy but disabled themselves, seeing their wives as maids and even abusing them.

Many of the Vietnamese wives have chosen to flee from their husbands and return to their home country with their children.

Although their husbands filed petitions for divorces in the foreign lands, the brides could not afford to be present in the courts there to get a document of divorce.

The Vietnamese women then built a family with other Vietnamese men after such divorces but their relationships have never been acknowledged in Vietnam because they are already married by law.

Their children thus do not have any official status and are therefore not admitted into schools in Vietnam because they are not natives by law.

Although local authorities are willing to send them to school, these children must wait to reach 18 years of age and to be given the nationality of their mothers’ since they do not need the approval of their foreign fathers by then.