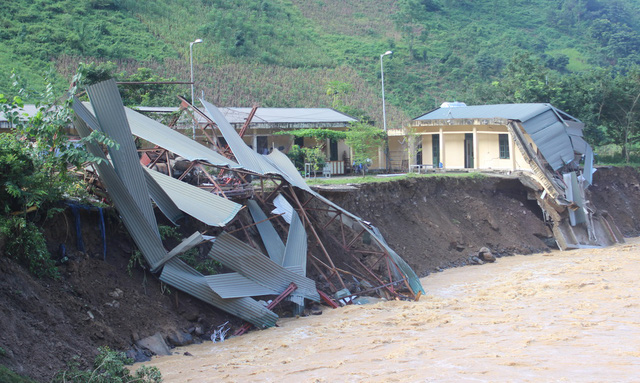 While Vietnam’s northern and north-central regions are still recovering from the aftermath of destructive floods that killed at least 60 people earlier this week, Tropical Storm Khanun is forecast to hit the mainland next week.

Initially forming east of the Philippines on Wednesday as a tropical cyclone, the typhoon is heading west and is expected to reach a location only 460 kilometers east of Vietnam’s Hoang Sa (Paracel) Archipelago by this afternoon, carrying winds of 90 to 100km per hour.

Tropical Storm Khanun may hit the mainland of Thanh Hoa and Nghe An provinces in the north-central region on Monday or Tuesday, according to Le Thanh Hai, deputy general director of the National Centre for Hydro-Meteorological Forecastings.

The forecast matches that of AccuWeather, which said on Friday that the typhoon will “further strengthen and take aim at southernmost China and flood-ravaged northern Vietnam Sunday into Tuesday.” Storm Khanun, the 11th to hit Vietnam this year, is expected to bring torrential rains and pose an imminent risk of floods and landslides to the northern and north-central regions.

“It is likely that a new storm will start forming in the East Vietnam Sea following the landfall of the 11th storm,” weather expert Le Thi Xuan Lan said.

Hai, from the National Centre for Hydro-Meteorological Forecastings, also warned that Khanun will impact a huge area, spanning from Quang Ninh Province in the north to Thua Thien-Hue in the north-central region.

“Good news is that the storm will weaken a little when reaching Vietnam’s mainland, otherwise the risk is huge as all reservoirs in the area have reached full levels,” he said.

The expected landform of Tropical Storm Khanun is the last thing people in northern and north-central Vietnam want to hear at the moment.

Widespread floods triggered by a tropical depression over the past few days in the regions have killed 60 people and left 36 others missing, according to the latest statistics on Saturday.

The depression hit central Vietnam on October 10, bringing lengthy heavy rains to the region and northern mountainous provinces, according to the Vietnam News Agency.

Hoa Binh is the hardest-hit province, with 22 people died and 13 were missing, followed by Thanh Hoa, 15 died and three missing, and Nghe An, nine died and one missing.