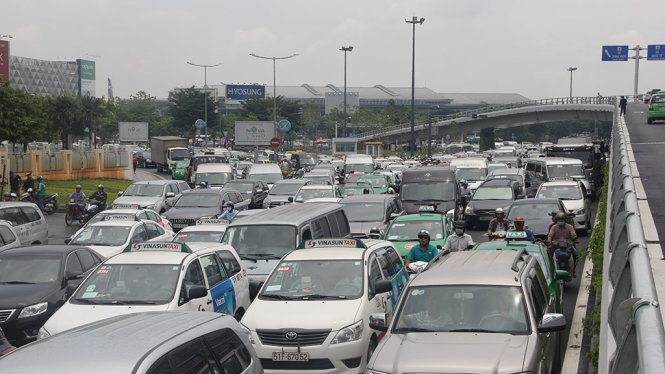 As previous efforts have proved ineffective, new solutions have been suggested to alleviate congestion at the entrance of Tan Son Nhat International Airport.

Ideas include the construction and expansion of roads, a new overpass, a monorail, and cable car routes.

In late September, the Urban Traffic Management Zone No.1 under the municipal Department of Transport began the expansion of Hoang Minh Giam Street in the hope of improving the situation.

According to local experts, Tan Son Nhat Airport can only be accessed via Truong Son Street.

This means the road must handle about 30 million passengers a year along with a large number of local commuters, making congestion inevitable.

Two projects have been recommended to deal with this specific issue, including the upgrade and expansion of Hoang Hoa Tham Street, as well as the connection of Tran Quoc Hoan with Truong Chinh Street.

According to the Urban Traffic Management Zone No.1, works on Hoang Hoa Tham Street are expected to begin in November.

The road will be 22 meters wide, with four lanes, requiring a total capital investment of VND254 billion (US$11.1 million).

However, the project can only be implemented once the Ministry of National Defense consents to hand over a parcel of military land.

In a bid to resolve the problem, Bilco JSC suggested the construction of two cable car routes, connecting the airport with Hoang Van Thu and Gia Dinh Parks, requiring expenditure of about VND500 billion ($22 million).

The Institute of Transport Science and Technology has proposed the construction of two monorail routes rather than a cable car, which will cost between $35 million and $50 million per kilometer.

According to Dinh Viet Thang, head of the Civil Aviation Authority of Vietnam (CAAV), the agency has been in contact with 11 consulting firms from the United Kingdom, United States, France, Japan, and the Netherlands since June.

The CAAV is expected to sign a contract with one of the firms in late October before adjusting the overall plan of Tan Son Nhat Airport, Thang said.