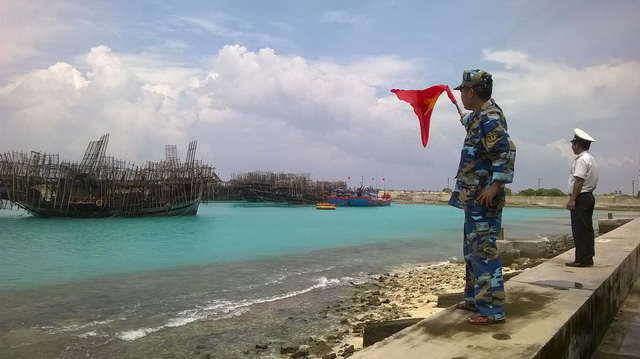 ​Plans to evacuate 386,000 ready as storm Damrey churns off Vietnam

With tropical storm Damrey continues to gathering strength and speeding toward Vietnam’s south-central coast, all provinces likely to be affected by the typhoon have prepared evacuation plans for nearly 400,000 local residents.

As of 10:00 am on Friday, the typhoon, the 12th to hit Vietnam this year, was located about 400 kilometers east of the coastline of the south-central province of Ninh Thuan. In early afternoon, the storm continued to strengthen, packing winds at 115 to 135km per hour.

Authorities in Binh Dinh, Phu Yen, Khanh Hoa, Ninh Thuan and Binh Thuan, provinces that are likely to be affected by the typhoon, have developed plans to evacuate a total of 389,143 people, according to the Central Steering Committee for Natural Disaster Prevention and Control.

Earlier on Thursday, the search and rescue committee in Phu Yen already evacuated 759 households with 1,958 residents in flooded areas to safe places.

In the meantime, the command of the Vietnamese border defense unit said on Friday morning it has briefed 385,911 people working on 79,182 boats of the storm’s movement and direction, as well as providing them guidance to stay safe during the extreme weather.

Forty boats with 308 laborers in Binh Dinh and Ba Ria-Vung Tau that are still operating in dangerous waters have been urged to rush to safe places before the storm makes landfall.

As of 10:00 am on Friday, 121 fishing boats with 2,985 fishermen have arrived at Vietnam’s Truong Sa (Spratly) archipelago in the East Vietnam Sea to shelter from the storm safely.

According to the latest forecasts, by 10:00 pm, storm Damrey will reach a location about 170 kilometers east of the coastline spanning from Khanh Hoa to Ninh Thuan, packing winds at 115 to 135km per hour.

Previous forecasts suggested that the storm will make landfall in the south-central region during the following 24 to 36 hours, before weakening into a tropical depression.