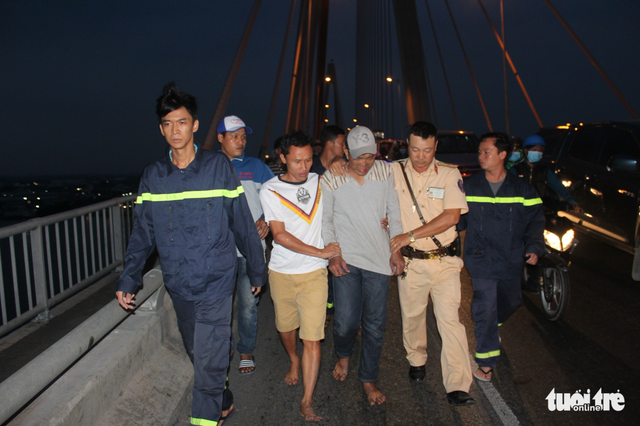 Police have rescued a man, purportedly high on drugs, who was doing stunts on a bridge in Vietnam’s Mekong Delta and threatened to jump off it.

Officers in Tien Giang Province were able to save the man after he had risked his life at the Rach Mieu, a 2.8 kilometer long bridge connecting Tien Giang and Ben Tre Provinces over the Tien (Front) River, on Saturday evening.

According to preliminary information, N.H.P., 39, who resides in District 2, Ho Chi Minh City, climbed off the fence of the bridge at around 5:00 pm that day.

Purportedly high on drugs, he was climbing up and down the fence and performing several stunts at an altitude of 40 meters above the water surface.

The man also threatened to jump off the bridge when bystanders attempted to stop his dangerous actions.

After being notified of the incident, officers from police traffic, firefighting, and rescue units under the Tien Giang Department of Police were dispatched to the scene.

Following an hour of convincing the man, they were able to bring P. back to safety and later escorted him to the police station for taking his statements.

He was still showing signs of being under the influence of drugs when answering questions of officers.