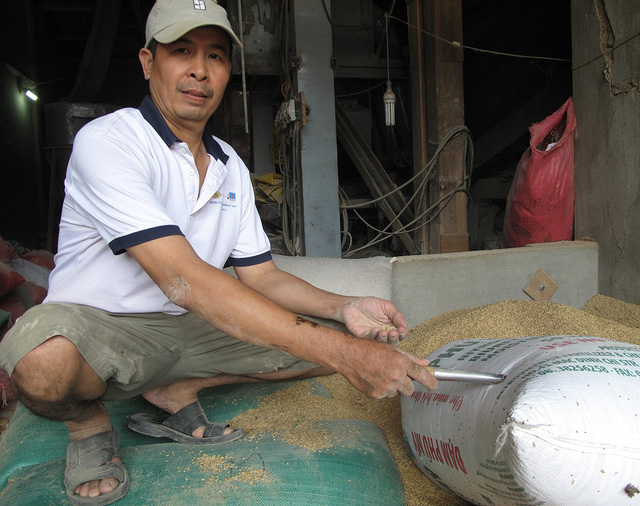 A man and his wife in south-central Vietnam have encountered too many claims from those identifying themselves as the rightful owner of the gold amount found in a bag containing rice which he purchased.

In January 2018, the family of Le Quang Thang, owner of a rice-husk removing facility in Tuy Phuoc District, Binh Dinh Province, spotted gold put in a bag of rice bought from a resident he did not remember, when they were moving rice to the husk machine at his factory.

He and his wife had recourse to the media to spread the information of the lost possession in the hope of facilitating the retrieval.

“Wanting people to easily contact me, I gave my phone number. After newspaper stories were published, I received phone calls from a whole lot of people, even from those in the north of the country, saying that the gold was theirs,” Thang said.

All these bogus claimants failed to answer his verifying questions.

A few days ago, a local woman met him in person at his house, asserting she was the owner; but she could neither tell features of the gold nor clearly provide her identity.

“I refused to give her the gold. So she shouted at me,” Thang recalled.

The problem also stemmed from his employees as well.

A man from the three people hired to work at his facility, who were the first to discover the gold, demanded that he also deserve a part of the precious metal.

Thang said that no true owner has been found so far.

The government has become involved in the case.

Duong Minh Tan, chairman of the People’s Committee in Phuoc Hung Commune, where Thang resides, said he appreciated the man’s deed of returning the gold but would convince him to hand the item to local authorities.

“Up until now, Thang’s family hasn’t officially reported anything about the case to the government,” Tan said.

Nguyen Thanh Nhan, head of the local police department, has advised Thang to give the gold to police or the People’s Committee but he turned him down.

According to a Vietnamese law, items lost or left somewhere are expected to be sent to the government if the person who has found them has no knowledge of the owner’s address; and those with fraudulent property claims are prone to financial or criminal penalties.