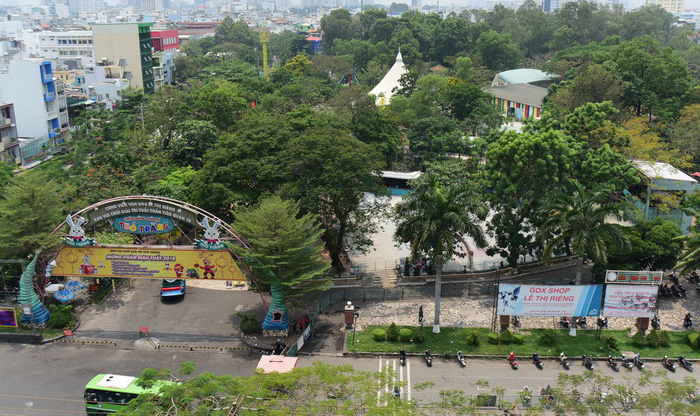 Authorities in Ho Chi Minh City have ordered the reclamation of common areas currently in use as event spaces and cafés within local parks.

Nguyen Thanh Phong, the city’s chairman, has tasked the municipal Department of Transport with enforcing the proclamation so that all compromised areas within the city’s parks are returned to their original condition

The transport department is required to set up a specific plan for the process and submit it by the end of this month.

Compensation will be given to those businesses operating under legitimate contracts with park management teams.

Accordingly, the District 6 Culture Center, which manages the Phu Lam Park, is finalizing the necessary paperwork to issue compensation to the lessee of an area inside the venue currently in use as a wedding hall.

“We will try our best to complete the process as soon as possible,” a representative of the district culture center said.

With regard to Tao Dan and Le Van Tam Parks in District 1, both managed by the transport department, legal procedures are under review in preparation for the removal of multiple structures and facilities within the parks.

At 23/9 Park in downtown Ho Chi Minh City, currently under the management of the transport department, the District 1 People’s Committee, and the Land Fund Development Center, multiple areas within the park are occupied by eateries and shopping areas.

The transport department has asked the city’s administration to put a stop to all such activities within the park and has ordered the removal of related constructions prior to June.

Section B of 23/9 Park is already swarming with restaurants and coffee shops, particularly the area near the Taka Plaza underground shopping mall. Other areas within the park host regularly organized markets and fairs.

Thanh Nien Park in District 2 and Phu Nhuan Cultural Park in the namesake district are in a similar state.

At Le Thi Rieng Park in District 10, the Tho Trang Amusement Park occupies a significant portion of the park, along with a two-story office building, a restaurant, a concert stage, a bookstore, and a chain of kiosks operated by food stalls and souvenir shops.

Nguyen Quang Minh, a local resident living near 23/9 Park, shared his concerns over the mushrooming of cafés and eateries in the park.

Likewise, Tran Thi Nguyet expressed her dissatisfaction with the regular fairs held in the area.

Large areas within these parks are blocked by these activities, and the hosts rarely clean up after themselves, Nguyet elaborated.

Authorities in Hanoi and the central city of Da Nang are also taking action to reclaim their local parks.