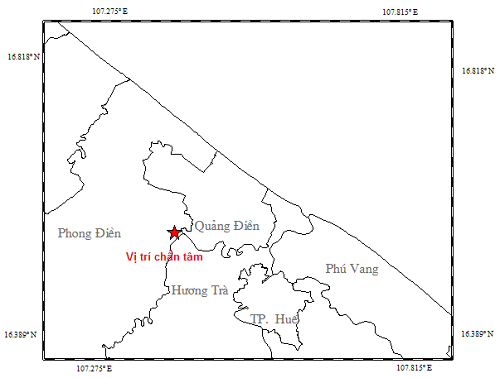 A low intensity earthquake struck a north-central Vietnamese region on Wednesday, reportedly causing no damage to the area.

The tremor hit Phong Dien District of Thua Thien-Hue Province at around 12:33 in the afternoon, said Nguyen Xuan Anh, director of Vietnam’s Institute of Geophysics.

Measuring 2.5 on the Richter scale, the earthquake was considered as minor, posing no harm to local residents, Anh added.

The epicenter is reported to be at the depth of ten kilometers.

The Hanoi-based Earthquake and Tsunami Warning Center, part of the institute, has been monitoring possible ensuing seismic developments.

The quake followed ten other moderate tremors recorded in Vietnam this year, with the most powerful magnitude-4.3 one striking Muong Ang District in Dien Bien Province on January 9.

Another area of Dien Bien has been rocked by five consecutive tremors until now.

Earthquakes in Vietnam typically occur in the northwestern region and the offshore area near the southern city of Vung Tau since these places sit adjacent to geological faults or underground fractures.