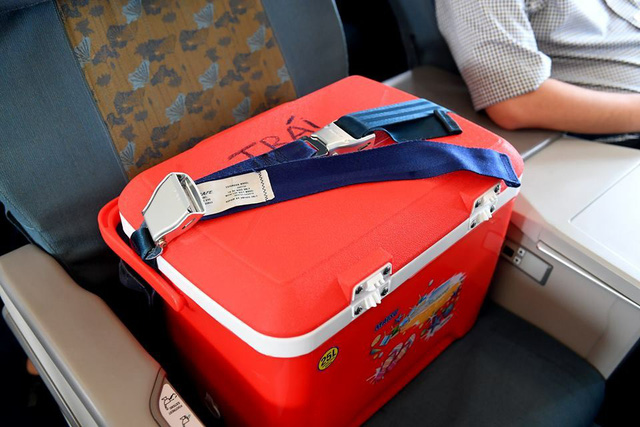 A Vietnamese airline has decided to have one of its flights depart from Hanoi to the central city of Hue later than scheduled, so it could help transport a donated heart to its new owner.

The donated organ was rushed to the capital’s Noi Bai International Airport after it was taken from a traffic accident victim, who passed away with a diagnosis of brain death at Hanoi-based Viet Duc Hospital.

The heart was cross matched to be implanted into a patient suffering end-stage heart failure at the Hue Central Hospital, according to test results by the National Organ Transplantation Coordination Center.

After learning of this information, the carrier in Hanoi has decided to let its flight depart 29 minutes behind schedule to wait for the heart to reach the airport.

The carrier also arranged a complimentary business-class seat for the donated organ, stored in a special container. A doctor was seated next to the heart to take care of it during the flight.

The special flight arrived in Hue safely, and the operation to transplant the donated heart to the new owner also ended successfully.

Following a four-hour operation at the Hue Central Hospital on Wednesday, the heart started beating in the new body, according to doctors.

The patient regained consciousness on Thursday morning and is currently recovering well.

The brain-dead patient was a young, healthy man prior to the fatal accident, according to his family members.

The family has decided to donate his organs to help others.

Besides the heart, the man also helped save five other lives with his liver, kidneys, and corneas.

These patients have also undergone successful operations and are recovering well.