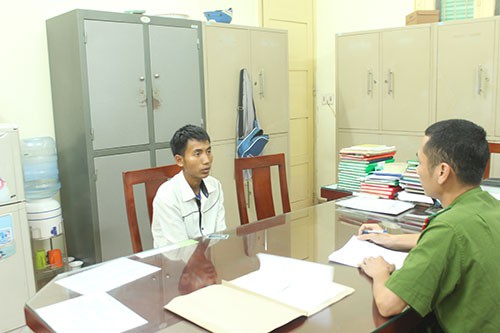 A Vietnamese man was arrested while attempting to send two countrywomen through the northern border to China, police said on Sunday.

Le Van Thanh was captured in Hanoi on Friday and has been handed over to authorities in his hometown in the north-central province of Nghe An, according to police in the Vietnamese capital.

Thanh once worked in China, while his older sister also lived there.

In late 2017, the sister suggested that Thanh bring gullible Vietnamese women and girls to China, in exchange for VND30 million ($1,320) for each successful ‘trade,’ according to police officers.

Thanh accepted the offer and returned to Vietnam, starting a fraudulent scheme with a Nghe An resident named Luong Van May.

May then offered a flower-growing job with a monthly salary of VND6.5 million ($286) in the Central Highlands city of Da Lat to 19-year-old L., one of his acquaintances in Nghe An.

L., in need of employment, agreed and asked a 17-year-old friend to travel with her to Da Lat.

On June 22, Thanh took the young girls to a passenger bus that did not head to Da Lat as they expected, but to a bus terminal in Hanoi.

Upon arriving in the capital, Thanh asked them to board another long-haul bus, where the girls began to realize that they had been deceived.

They were threatened by the man while trying to run away.

But some security guards at the station, suspecting that it was a case of human trafficking, reported the incident to local police, resulting in Thanh’s arrest later the same day.