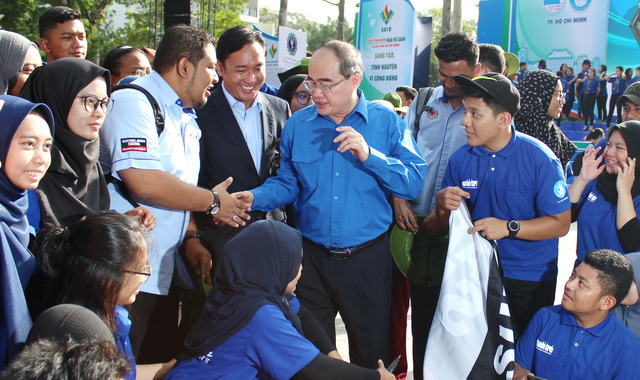 The annual Mua He Xanh (Green Summer) volunteer campaign kicked off its 2018 season in Ho Chi Minh City on Sunday, with more than 60,000 young people ready to spend their summertime engaging in community activities.

The launch ceremony, hosted by the Ho Chi Minh City chapter of the Vietnam Youth Federation, was attended by the city’s Party chief Nguyen Thien Nhan.

This year’s campaign, lasting from July 15 to August 12, focuses on building civilized lifestyle in urban areas and protecting the environment.

The volunteers will work to stop people from throwing garbage into sewers, one of the main causes of chronic inundation in Ho Chi Minh City during the rainy season.

More than 60,000 participants will bring the campaign to all 24 districts of Ho Chi Minh City, 14 provinces in the Central Highlands, southeastern and southwestern regions, as well as Tho Chu Island off Kien Giang Province.

Besides Vietnamese volunteers, the campaign also welcomes 55 students from Malaysia.

Nhan, the city’s Party chief, said the participation of volunteers from Malaysia, which has a higher income than Vietnam, has a significant meaning to Vietnamese people.

Prior to Sunday’s campaign launch, 80 volunteers left Ho Chi Minh City for the Lao provinces of Attapeu and Champasak to start their ‘Green Summer’ there.