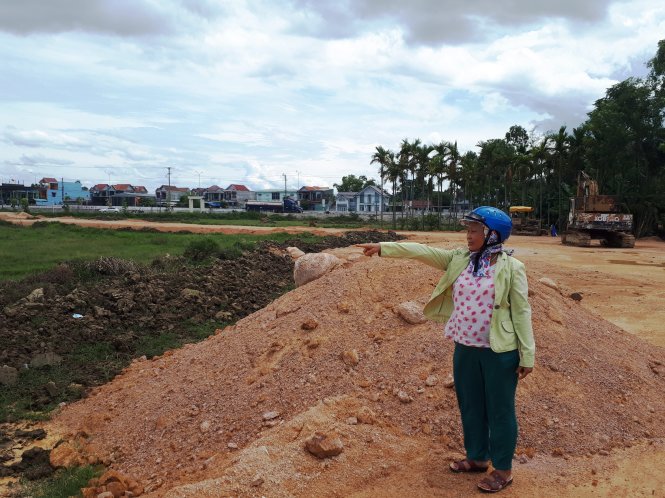 As real estate prices in central Vietnam escalate, local mountains are being leveled for soil to be used in the leveling of paddy fields upon which new residential areas are built, a trend that might have grave environmental consequences in the long run.

Since May this year, paddy fields in a village in the central province of Quang Nam have been turned into a massive construction site, as agricultural land is being reclaimed to make space for a 9.8-hectare residential area.

Hundreds of local farmers have been out of job since they gave up their only means of production to the project developer.

Construction activities are actively carried out despite the fact that the project has only been approved in principle by the provincial administration, without any construction permit to justify the land clearance.

“I haven’t agreed to the deal because that’s too little,” M. said.

“They buy our land at a dirt-cheap price but resell it ten times the value,” she added.

Even when M. refused to receive the modest compensation, the project developer has been carrying out the site clearance task on her piece of land without her consent.

The project is located next to National Highway 1, where dozens of makeshift real estate offices have sprung up to offer sales of land that is part of the project.

According to official statistics, there are as many as 304 ongoing projects in Quang Nam that require the repurposing of land, most of which involves the transformation of farmland into habitable land.

As of mid-2018, the province has licensed different entities to be developers for nearly 30 residential area projects, which are completing paperwork to receive in-principle investment approval.

This fresh wave of real estate projects threatens to shrink production land in the province and renders farmers out of job.

Things are similar in the neighboring city of Da Nang, where two major freshwater lakes in the districts of Hoa Vang and Cam Le have been completely reclaimed for the construction of residential areas.

A vast area of paddy fields in Hoa Vang’s Hoa Lien Commune has also been destroyed for the development of a 400-hectare urban area project by Trung Nam JSC.

Thousands of hectares of farm and aquaculture land spanning from Cam Le District to the foot of the Ngu Hanh Son Mountain in Da Nang has been reclaimed for the construction of the Hoa Xuan urban area.

The number of lakes in Da Nang has been reduced from 42 to 30, giving rise to 50 spots of severe inundation citywide as there is less natural drainage for rainwater.

Vo Hong, deputy chairman of the People’s Council of Quang Nam, admitted there had been “shortcomings” in the management of local land in the past.

“However, the province has learned from its mistake and now prioritizes only projects that can influence the growth of local commerce and services,” Hong said.