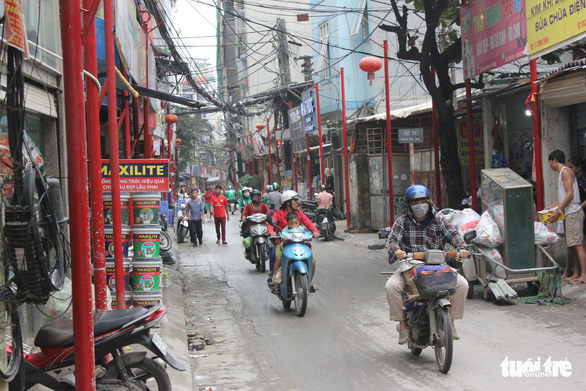 The Hanoi administration has come under widespread criticism after lining a public road with red poles in a presumably well-meant attempt to create a more beautiful, livable city.

Many believe the project highlights the administration’s unwillingness to learn from the shortcomings of a similar project which ultimately turned out to be a bust when it was implemented along another thoroughfare.

Locals described the 200 bright red metal poles along Dinh Thon Street in Nam Tu Liem District as an eyesore and nuisance in the already congested area.

The primary goal of the project was to give shop owners a place to hang signs and billboards uniformly at the same height and to create space for the government to display national flags and lanterns during major holidays and events.

The poles are just the first stage of a three-phase plan to beautify the residential area along Dinh Thon Street.

When the street was originally upgraded from a village road during a larger project to urbanize Nam Tu Liem District, city planners did not include space for sidewalks, designing the width of the road to reach just inches from shop and restaurant entranceways.

Now, the tiny space separating the street and buildings is filled with the new red poles, which tower just under the tangled web of electric wires covering the street.

At just five meters wide, Dinh Thong street is often busy with vans, cars, bicycles, vendors’ carts, and pedestrians. Due to the mishmash of vehicles and lack of sidewalks, disorder often rules the activity on the street.

The poles are unevenly spaced along a one-kilometer section of the street and shop signs jut out perpendicularly, though the government originally wanted them to face the road.

Just days into the project, locals are already voicing their complaints.

“Now the whole road is red all year round, as if it’s having a festival,” he said.

Architects and urban planners were also quick to criticize the initiative.

“The poles’ composition and material are only suitable for short-term use. I won’t comment on if they are beautiful or not, but they’re bound to hamper pedestrian movement and obstruct views,” Ha said.

The red poles are a piecemeal approach to modernization. They make the entire process more chaotic without even touching on more central issues, Anh said.

He mentioned the failure of a similar project aimed at creating visual uniformity on Le Trong Tan Street in Thanh Xuan District two years ago, in which shop owners were required to have all signage in only red and dark blue.

Officials should not assume the job of experts if they do not want adverse consequences, said Nguyen The Son, a visual artist at the Vietnam University of Fine Arts.