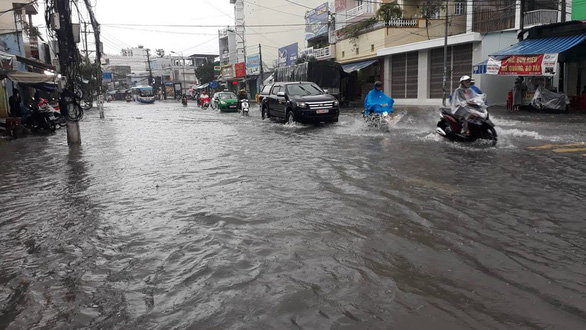 Rain is expected to dampen many localities across Vietnam and potentially affect New Year celebrations due to the combined effect of a cold front and tropical depression.

The weather conditions in the mainland and at sea, especially on islands, will not be favorable for entertainment and tourist activities during the New Year holiday, said Le Dinh Quyet, an official from the southern hydro-meteorological center.

This is the result of a cold spell from the north and a tropical depression that is heading toward the East Vietnam Sea, Quyet explained.

The low-pressure system is forecast to enter the maritime area on Sunday and chances are that it will be upgraded to a storm.

As of Monday afternoon, the storm will approach the northern part of Vietnam's Truong Sa (Spratly) archipelago, packing winds at 60 to 75km per hour and gusts at up to 102km an hour.

The storm, however, is not likely to make landfall as the strong cold snap will alter its direction, ‘pushing’ it southwestward, Quyet assessed.

He said that the weather phenomenon will bring rain and thunderstorms to southern Vietnam from Sunday to Tuesday, or New Year’s Day.

The National Center for Hydro-metrological Forecasting confirmed on Saturday that the cold spell has brought about downpours and chilly weather in northern provinces.

At Mount Mau Son in Lang Son Province, mercury dipped to minus 0.5 degrees Celsius on Sunday morning, causing frost to form in the area.

Rainfall will gradually decline but linger until New Year’s Day, while the atmosphere will remain cold until January 4.

Another mudslide killed three people in Khanh Hoa at around 1:00 am on Sunday.

The rainy weather is going to affect the region on Sunday and Monday and may last until January 3 or 4 in Da Nang City and Quang Nam, Quang Ngai Provinces.