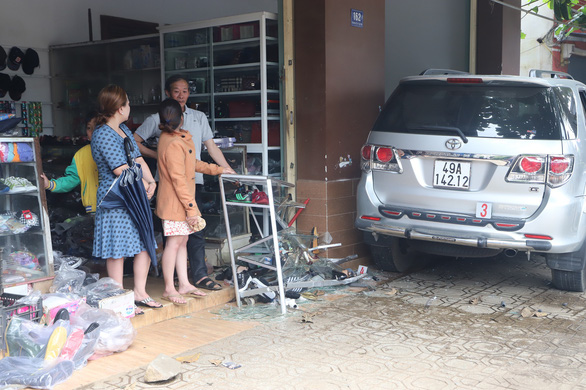 A woman was killed after a car crashed into her home along a national highway in Lam Dong Province, located in Vietnam’s Central Highlands, on Saturday.

The seven-seater automobile was traveling along the section of National Highway 20 in Loc Son Ward, Bao Loc City in the afternoon at high speed prior to the accident.

The car suddenly entered the lane of the opposite direction and hit a woman who was carrying her son on a motorbike.

The automobile then mounted the sidewalk and crashed into the front of a house, before hitting several motorbikes parked on the promenade, and only came to a complete stop when it slammed into a big tree.

Following the incident, a 62-year-old woman named Kim Tinh, who was sewing her clothes in front of the house, was killed.

The young boy on the motorbike was seriously injured following the collision and was admitted to the hospital for emergency treatment.

Four motorbikes and the car itself were heavily damaged at the crash site.

Police officers later arrived to examine the scene and determine the cause of the crash.

The identity of the car driver has yet to be revealed.

According to Dan Tri news site, the automobile must have tried to avoid a motorbike coming out from an alley before the serious accident.