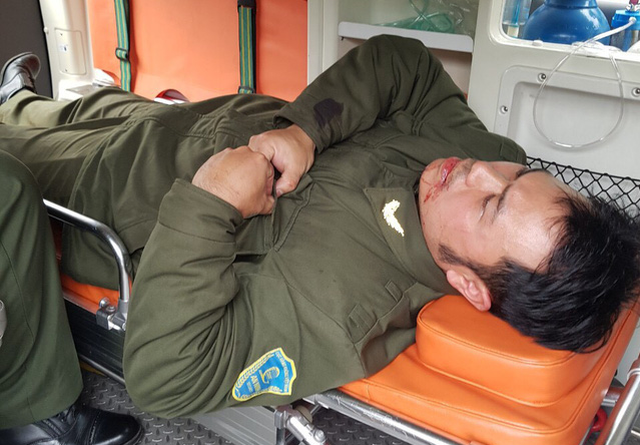 A security officer at the Noi Bai International Airport in Hanoi was trying to stop a group of brokers from luring passengers to their unauthorized taxi service when he was assaulted by a man and a woman of the group on Friday afternoon.

Nguyen Van Diep was on his duty at hall E, floor 1 of Terminal T1 at around 1:30 pm, when he caught the female broker, Tran Thi Ly, attempting to invite passengers to an illicit taxi service, according to the airport’s management.

Diep went ahead to stop Ly, but the woman and another man assaulted him, causing him to have four of his teeth broken and bruises left across his body.

The airport security officer was then rushed to Bac Thang Long Hospital in Dong Anh District for treatment.

According to the airport’s management, Ly resides in Hanoi’s outlying Soc Son District, and is an ‘experienced’ illegal taxi broker. The woman has many times received written records for illegally luring passengers at Noi Bai.

The case file was transferred to the police of Soc Son District, where Noi Bai airport is located, for investigation.

Unlicensed taxi services, run by individuals blatantly picking up passengers using private cars even when they are not registered to do so, have been the norm at the Hanoi-based airport for many years.

The violations have recently been more and more rampant and become increasingly sophisticated, with illicit cab drivers and brokers preparing more tricks to dodge security officers. They are also more reckless and always ready to fight back at security officers.

The security and police units at Noi Bai last year handled as many as 823 cases, most of which involved unauthorized taxi services and brokers luring passengers at the airdrome. Five cases of airport security officers being attacked and assaulted by these actors were also recorded in 2018.