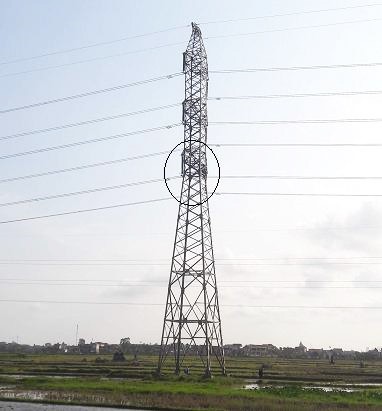 Vietnamese man subdued after staying on pylon for 36 hours

A man from northern Vietnam was finally brought under control on Saturday after staying on a transmission tower for over 36 hours.

He was talking unintelligible random phrases and believed to be under the influence of drugs, Hien said.

Dispatched to the scene, police and rescue workers repeatedly persuaded the man, identified as Trinh Van Nham, 42, to descend but the effort ended in vain.

Meanwhile, no power cut was possible as the transmission lines provide electricity to the inner city and the neighboring province of Thai Binh, Hien explained.

“We kept an eye on him around the clock, patiently dissuading him but he’s still sitting up there talking nonsense all the time,” the official recalled the Friday night in a rice paddy, where the 30-meter-tall pylon stands.

“He climbed down for one or two times, only to climb back up.”

It was only around 4:30 pm on Saturday that the man was subdued while he was descending to take food from his family, domestic news media reported.

The man is known to be divorced, to have a history of being a drug addict and to have returned home last year from a rehab center.