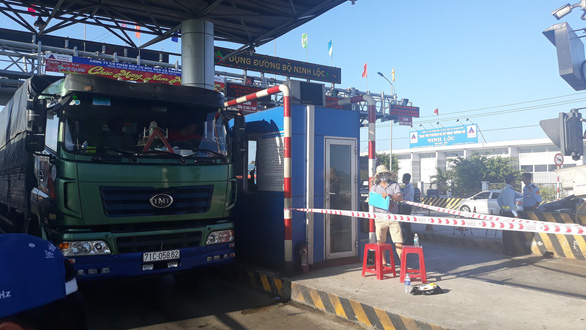 Around a dozen residents in south-central Vietnam have taken it upon themselves to sit at a toll station and count passing vehicles manually, as they suspected the facility’s operator dishonestly manipulated figures of traffic volume to prolong the fee collection period.

Nguyen Minh Hung, a representative of the grass-roots group, told Tuoi Tre (Youth) newspaper that all members started the observation on Tuesday and would not stop until the end of Monday next week.

Hung and his team are keeping track of traffic volume passing through the toll gate on the section of the National Route 1 – Vietnam’s longest highway – in Ninh Hoa Town of Khanh Hoa Province, where the tourist city of Nha Trang is located.

Trucks and cars running on this road section must pay toll fees to the company that developed the road under the BOT (build-operate-transfer) scheme.

The BOT developer, which is also responsible for maintaining the highway, is allowed to collect toll fees until it recoups its investment and gains some financial profits.

“But this is subject to change,” Long said.

Local residents, however, believe that the investment lacked transparency and the vehicle counts, according to data publicized by the developer, at the toll plaza were unreliable.

They have thus started counting vehicles by themselves, and categorized them into the types shown on pricing signs at the tollbooths before calculating the total amount of money collected during a day.

A local police chief said the group had not done anything illegal but law enforcement has kept an eye on them to preempt violations.

Deputy director Long said transparency was ensured as the operator reports the traffic figures and toll revenue to relevant authorities on a monthly and quarterly basis, and the plaza has also been regularly visited by transport ministry inspectors.

“The counting of vehicles is done by machine,” Long stressed.

“When a ticket is scanned, the boom barrier is lifted and the number of times the barrier does this is stored in the computer.

But he did not mention the possibility that someone may try to tamper with computers doing the job.