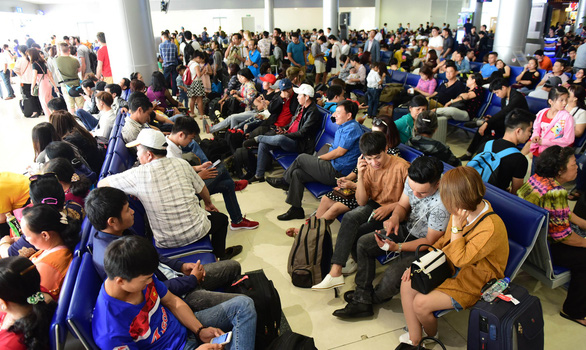 Read what is in the news today, March 25!

-- Chairwoman of Vietnam’s lawmaking National Assembly Nguyen Thi Kim Ngan will make official visits to Morocco and France, work with the EU Parliament and attend the 140th Assembly of the Inter-Parliamentary Union (IPU) and related meetings in Doha, Qatar from March 28 to April 8.

-- As Tan Son Nhat International Airport in Ho Chi Minh City is handling 38.5 million passengers yearly compared to its designed capacity of only 28 million, the transport ministry has proposed that the Airports Corporation of Vietnam be assigned as the developer for the third terminal of the southern airport, effectively raising its capacity to 50 million passengers a year by 2025.

-- The administration of Lao Cai Province in northern Vietnam has asked for the prime minister's approval for a proposal to develop a VND5.9 trillion (US$253.83 million) airport in the town of Sa Pa to boost local tourism.

-- Over 270 kilograms of crystal meth was seized in the Philippines on Wednesday from a cargo ship that had departed from Ho Chi Minh City thanks to a joint operation by Vietnamese and Philippine authorities, Vietnamese drug police said on Sunday.

-- Vietnam’s Institute of Urban Planning has submitted to the Ministry of Construction a plan to relocate the headquarters of 12 ministries and central government agencies away from the downtown area of Hanoi.

-- The second location of the top-tier Bach Mai Hospital in Hanoi launched its outpatient clinic on Monday, capable of providing medical services to 1,000-1,500 patients daily.

--Droves of farmers in Mekong Delta provinces are using rice fields to grow a species of Thai jackfruit, sought after by merchants for export to foreign markets such as Europe, with an estimated profit rate of more than VND600 million ($25,900) annually per hectare.

-- Vietnam’s automaker Truong Hai Corporation (THACO) exported its first shipment of fruits to China on Sunday, marking the start of a growing trend for domestic industrial enterprises to invest in agriculture.

-- Electronic goods shops and supermarkets in Ho Chi Minh City are offering big promotions of up to 50 percent on air conditioners and refrigerators while also throwing in free delivery and installation as well as a zero percent interest rate on installment payments to boost sales as the hot season approaches.

-- Vietnam managed to claim a hard-earned win against Indonesia with a 94th-minute goal by midfielder Trieu Viet Hung in their second Group K match of the 2020 Asian Football Confederation (AFC) U23 Championship qualification, placing them second after Thailand.