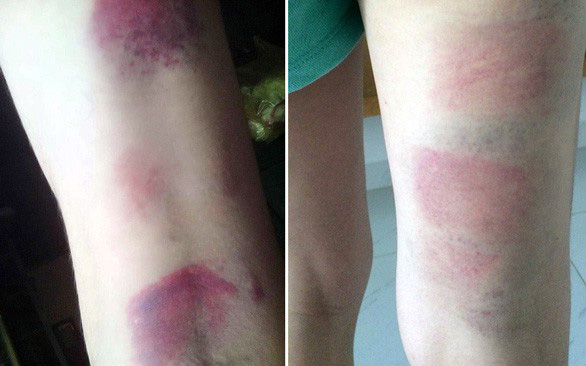 A female teacher in the southern Vietnamese province of Ba Ria-Vung Tau has been suspended from work after she was accused of beating 22 eighth-grade students with a ruler, resulting in multiple bruises on their legs.

Preliminary information showed that 22 out of 31 students in class 8A1 were beaten by their homeroom teacher Nguyen Thi Thu Huyen on Friday morning.

The teacher stated in her report that the group of students were making a lot of noise and disorder in the classroom, so she disciplined them by hitting them with a ruler.

Parents of the eighth-graders discovered bruises on their children’s legs on Saturday and posted the situation, along with some photos, to social media.

They also reported it to the school board.

According to vice-principal Nguyen Thi My Hoa, the school board has been aware of the case and asked Huyen to make a report on Monday morning.

Huyen was also temporarily suspended from work until the municipal education and training bureau decide a suitable disciplinary action for her.

The form teacher and leaders of the school also visited some of the students’ at their houses on Monday to express their apologies.

Hoang Duc Minh, an official from the Ministry of Education and Training, told the press on Monday evening that stern penalty must be imposed upon the teacher if the accusation is true.