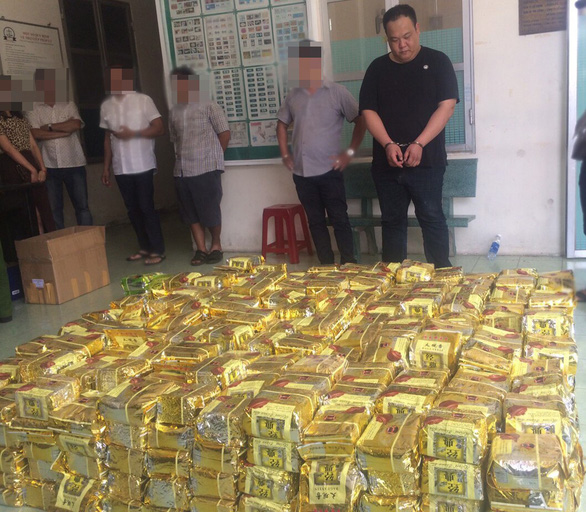 Ho Chi Minh City police have arrested and launched criminal investigation against two Taiwanese men and a Vietnamese national in a large-scale drug bust that saw the seizure of over 1.1 metric tons of meth and ketamine.

The drugs were packaged as tea bags and concealed inside acoustic speakers found on two trucks.

Yeh and Chiang told the police they were working on the order of a Chinese national to transport the drugs from the neighboring province of Dong Nai to Ho Chi Minh City.

Chiang, 31, has entered Vietnam three times since 2018 while it was the first time in Vietnam for Yeh, 33, according to the municipal police.

The drugs they were found transporting had been smuggled into Vietnam from Thailand through local cargo company Ngoc Van, which had another shipment of drugs delivered to an address in District 3.

Following this lead, police officers in the southern metropolis were able to catch Vietnamese national Bui Nguyen Huy Vu, 38, while he was transporting 49.32 kilograms of synthetic drugs.

Nearly three kilograms of synthetic drugs and 998.69 grams of ketamine as well as a loaded revolver were also found at Vu’s residence.

The man said he was working on the order of a suspect in Laos.

On April 13, police officers raided a storage of Ngoc Van shipping company and seized another 451.98 kilograms of meth, also disguised as tea bags.

The municipal police have also launched criminal investigation against and arrested Yeh, Chiang and Vu on drug charges.

Ho Chi Minh City police said it is working with the Ministry of Public Security and police in the north-central provinces of Ha Tinh and Nghe An to find links between recent hauls of narcotics across the country and investigate the roles of suspects operating from Thailand, Laos and Malaysia.