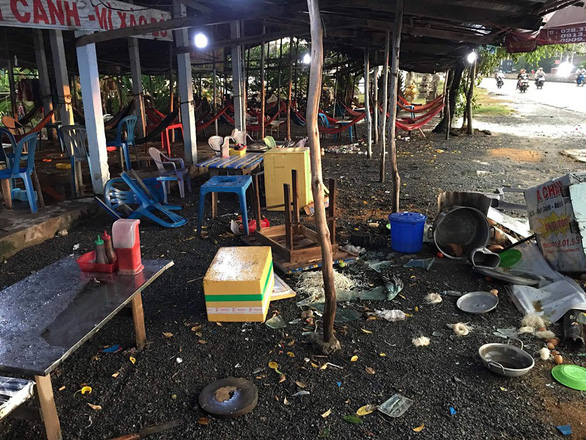 The owner of an eatery in Vietnam’s Mekong Delta has shut down his business after he was caught on camera hitting a customer, which resulted in his venue being vandalized by a group of unidentified people.

Tran Van Ngoan , 42, who previously operated a diner in Ben Luc District, Long An Province, told Tuoi Tre (Youth) newspaper on Saturday that he had decided to close down the venue.

Ngoan has also returned the space, which was leased to run the eatery, and taken his wife and five-year-old son back to his hometown in southern Tay Ninh Province.

“I have no new plan yet. Maybe we will find some other things to do for a living,” the man said.

Ngoan’s decision came after an incident on Wednesday evening, when he forced two customers to leave his diner and eventually injured one of them.

On that day, a married couple arrived at the venue and was charged VND60,000 (US$2.5) for two bottles of water.

They talked with a person in the next table and found the eatery once charged VND100,000 ($4.3) for a bowl of noodles.

M., the husband, asserted that the owner was overcharging his customers, before Ngoan shouted at the couple, stating that he was falsely accused, and forced them to leave.

M. contacted local police officers as he was afraid of being assaulted.

As he waited for them to arrive, Ngoan and two other people attacked him and inflicted some injuries on his head.

The eatery was vandalized the following afternoon, while the owner was working with local police.

Local authorities have been probing the incident, verifying whether or not Ngoan had ripped off his customers, and working to identify those who had damaged the eatery.