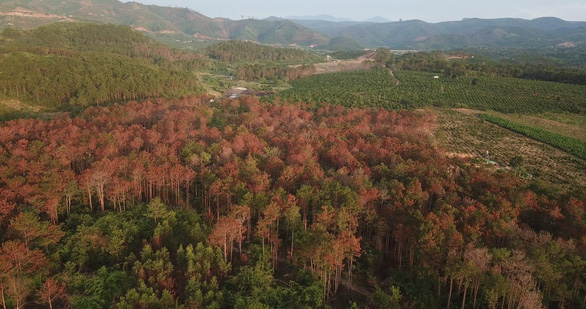 Authorities of the Central Highlands province of Lam Dong launched a probe on Tuesday to look into the poisoning of 3,500 decades-old pine trees at the end of last month.

The trees, located in Tan Thanh Commune, Lam Ha District, were found to have been poisoned with herbicides and had had holes drilled through their trunks, resulting in a ten hectare area densely populated with dead trees.

The vandalized area is part of a 133 hectare land plot used by Tan Mai Corporation for growing trees used for paper production, according to the forest management agency.

The business has been responsible for growing, caring for, managing, and protecting trees on the designated area since it was granted permission to use the land by the People’s Committee of Lam Dong.

Since 2018, the area has been vandalized several times in what authorities suspect are attempts to reclaim the land.

Signs that the trees had been poisoned first appeared on April 28 when their leaves began to turn yellow, according to Tran Quang Sang, a manager at Tan Mai Corporation.

An area of 10,785 hectares suffered from the damage.

Among the 3,500 poisoned plants, 3,400 17-yaer-old three-leaf pine trees have suffered irreparable damage and have died or will die.

On April 29, the district appointed the forest protection unit to cooperate with the People’s Committee of Tan Thanh Commune to examine the scene and submit a report to assist an investigation.

Even though the act has caused considerable damage to both the environment and to Tan Mai Corp., such actions are only subject to fines ranging from VND3 million (US$130) to 5 million ($210).

“This is not serious enough fine to prevent such actions from happening, making it harder for authorities of the region to manage the forest,” Nguyen Hai Quan, deputy chairman of the commune, said.

On April 26, two days before the first signs of poisoning were discovered, the area was reported to have been broken into, according to Nguyen Minh An, Deputy Chairman of People’s Committee of Lam Ha District.