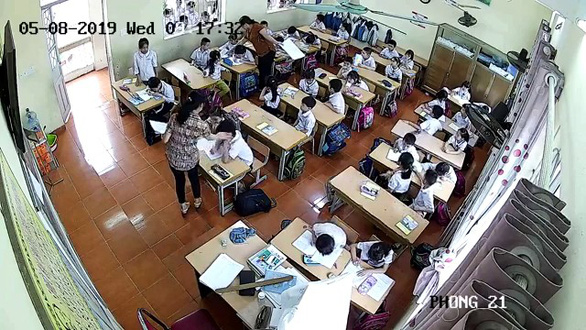 A female teacher in the northern Vietnamese city of Hai Phong was given a six-month suspension after CCTV footage captured her beating multiple second-grade students in a classroom earlier this month.

Trang was also given a one-year ban from working as a homeroom teacher.

According to the school board, the incident occurred in a second-grade classroom on the morning of May 8 and was captured by a camera installed inside the room.

In the footage, Trang was seen slapping and hitting multiple students with a ruler between 7:35 am and 10:17 am while the students were taking a final exam.

Among the youngsters, Bui Manh D., appeared to have taken the brunt of the attacks.

In her talk with administrators, the teacher attempted to justify her actions by explaining that the students were sluggish during the exam.

The situation was first reported to the school board after D.’s parents discovered his wounds.

The parents also posted the CCTV footage to social media.

D. received hospital treatments for soft-tissue wounds on his temporal regions, an injured left ear, and two bruises on his left leg, his parents said.

Trang has yet to offer an apology or speak to the family about the incident, D.’s parents stated.

The Hong Bang People’s Committee was scheduled to meet the family on Thursday afternoon to discuss further solutions.