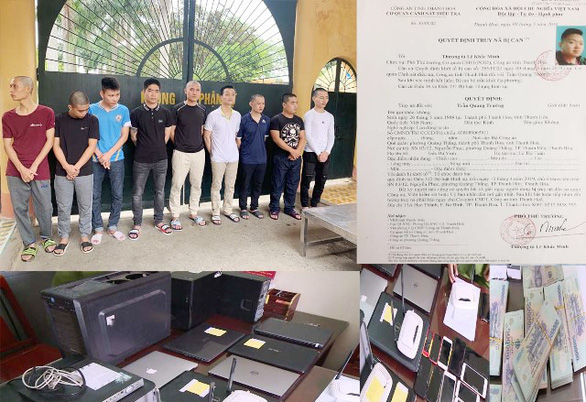 Police in the north-central Vietnamese province of Thanh Hoa have busted an online gambling ring with transactions totaling nearly VND4 trillion (US$172 million).

This is one of the largest gambling rings to have been broken up in Thanh Hoa Province, the provincial Department of Police confirmed on Tuesday.

According to officers, the illicit operation was led by Tran Quang Truong, a 30-year-old resident in Thanh Hoa City, the capital of the namesake province.

Truong remains at large, and a nationwide manhunt has been initiated.

Police have been able to apprehend nine members of the ring, who are between 21 and 30 years old.

Preliminary information showed that the ring had allowed people to gamble via online card games.

The transactions were carried out by bank transfer or directly at one of the ring’s five “agents” in Hanoi and Thanh Hoa.

Officers have searched the five venues and confiscated seven computers, seven laptops, 34 mobile phones, two documents proving the ownership of a house and a land plot, one automobile, and nearly VND500 million ($21,500) in cash.

About VND6 billion ($258,000) in multiple bank accounts belonging to the ring members was frozen to assist the investigation.

Police also found a large number of files and records indicating that the transactions carried out by the ring had reached nearly VND4 trillion.