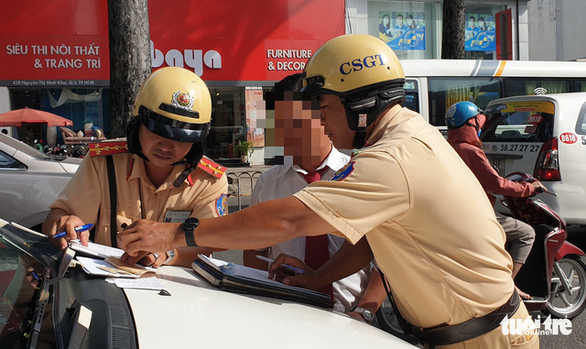 Ho Chi Minh City police officers commenced on Monday their month-long campaign to crack down on DUI, speeding, failure to wear crash helmets, street racing, and other traffic rule violations in all of the city’s 24 districts.

Police will beef up their patrols to check all vehicles including motorbikes, cars, trucks, trailer trucks, and long-haul buses from July 15 to August 14, officials said on Sunday.

Officers from the Ben Thanh Traffic Police Unit started patrolling many streets at 8:00 am on Monday and ticketed many law breakers.

Many taxi, bus, and truck drivers were booked for their violations on Ton Duc Thang and Nguyen Thi Minh Khai.

Traffic police officers will strictly crack down on DUI, use of drugs, speeding, street racing, traveling in wrong lanes, passenger cramming, and failure to wear crash helmets, among others.

They make sure street criminals will be quickly caught during the campaign.

Comprehensive checks will be carried out on vehicles at airports, bus stations, ports, warehouses, clubs, bars, and restaurants.

Police will ask for vehicle papers from the drivers in order to single out fake documents.

They are allowed to impound vehicles when their drivers are found using drugs, transporting inflammable material, dangerous commodities, or contraband.

Any defiance will be captured on camera and will not be tolerated, officials said.

Tran Thanh Chuc, a driver in Tan Binh District, supported the campaign and measures, urging police officers to focus on testing drivers for drugs and specifically clamping down on drunk driving to prevent deadly crashes.

Everyone should obey traffic rules to ensure safety for themselves and others, he advised.