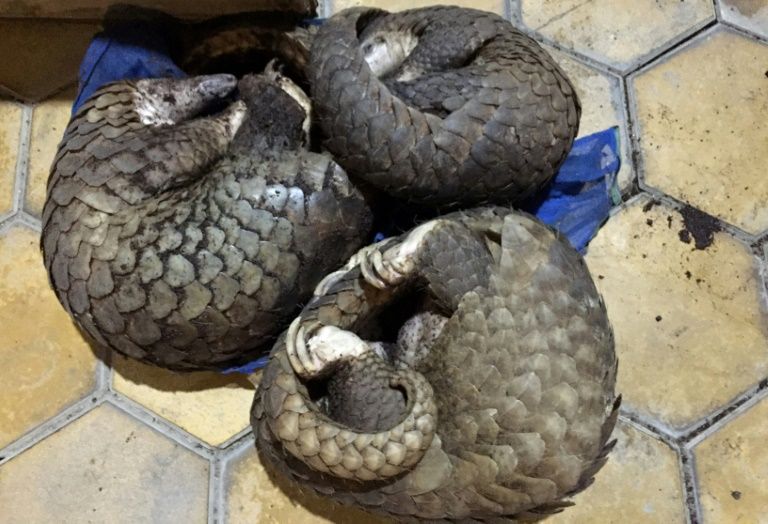 Dozens of live pangolins found hidden on bus in Vietnam

Dozens of live pangolins smuggled from Laos were discovered "dehydrated and weak" on a bus in central Vietnam, police and conservationists said Tuesday, in a country where the endangered mammals are a highly-prized delicacy.

The small, docile pangolin is the most trafficked animal in the world, and is found across Asia and Africa, with one snatched from the wild every five minutes, according to the World Wildlife Fund.

In Vietnam pangolin meat is considered high-end and hard to find and their scales are used in traditional medicine to treat allergies and impotence.

Police on Monday found 30 pangolins stuffed into boxes on a bus in Ha Tinh province, arresting the driver and his wife on suspicion of trafficking the animals from Laos.

Four were already dead and many of the surviving animals were in bad shape, said Truong Van Truong from the NGO Save Vietnam's Wildlife.

"Most were dehydrated and weak because they were kept in a tight space for a long time," he told AFP.

The pangolins were tied into individual sacks and crammed into a box, where they might have been kept for weeks with little water or food, he added.

They will be nursed back to health before the strongest are released back into the wild.

Police said the driver and his wife were paid to transport the animals from neighbouring Laos.

The rescue comes on the heels of major wildlife seizures over the past week in Vietnam, both a consumption and transport hub for illegal wildlife in Asia.

Police arrested a wildlife trafficking suspect and two others after finding seven dead tiger cubs in their car in a Hanoi parking lot Thursday.

On the same day 125 kilograms (275 pounds) of rhino horn encased in plaster was seized at the capital's airport.

Often described as scaly ant-eaters, pangolins curl into a ball when scared, making them easy prey for hunters.

They once roamed free in Vietnam's forests, but numbers have dwindled dramatically thanks to rampant poaching and habitat loss.

They are categorised as "critically endangered" according to the International Union for Conservation of Nature.